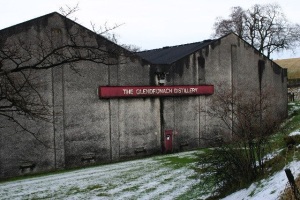 In 1826 the exuberant and extroverted James Allardice founded the distillery and produced his ‘Guid GlenDronach’ single malt. Down the years, the distillery he created has thrived under the stewardship of far-sighted investors like Walter Scott in 1847 and Captain Charles Grant in 1920. In more recent times, GlenDronach was bought in 1960 by William Teacher & Sons.
But in 2008, nothing less than a complete renaissance began. The BenRiach Distillery Company became GlenDronach’s proud new owner.
While time can never stand still, the commitment of the team at GlenDronach will ensure that the distinctive practices that have always defined the distillery will live on – the most influential of these, its return to independent ownership.

The GlenDronach Distillery is famous for producing richly sherried single malt whiskies of inimitable and individual character. April 2009 marked the re-launch of the already popular 12 year old Original as well as the return on the iconic older expressions – the GlenDronach 15 and 18 year olds. Since then we have developed the range with superb expressions matured in the highest quality sherry casks.