The history of Tullibardine as a location for brewing and distilling is one of the oldest in Scotland. Located in Blackford, the gateway to the Highlands, it was here in 1488 that the young King James 4th of Scotland stopped by on his way to his coronation, to purchase beer from the local brewery. This was recorded as the first public purchase of beer.

Recently Tullibardine began a new chapter in its history as in November 2011 the distillery was purchased by an independent family company already involved in the Whisky Industry. There is no doubt that the future of Tullibardine is in safe hands. With a wide portfolio of stock ranging back as far as 1952, Tullibardine is a lovely sweet, elegant and complex malt whisky. 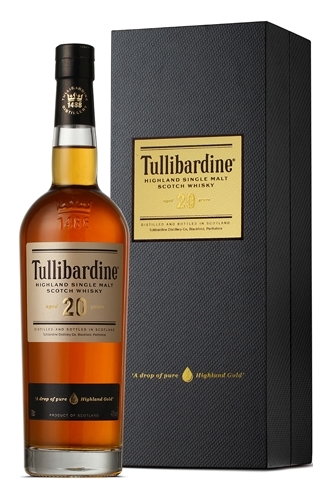 So after reviewing a couple of the core range from Tullibardine, I now have the pleasure of trying the 20 yo. This malt is part of the repackaged range released in 2013, it has been matured for the whole 20 years in first fill bourbon casks, and has been bottled at 43%abv.

Nose.. After giving the whisky plenty of time to open up this whisky starts to give up those secrets your trying to find.. Wave after wave of sweet scents like vanilla, toffee, honey and butterscotch tickle your nose before you get those fruit salad sweets  we used to eat as a kids ( ok some of us older people) sugared almonds and a subtle citrus note mingle in the background.

Palate.. A lovely sweetness coats your entire mouth, lots of syrupy notes, dark treacle, vanilla and toffee. A gentle chocolate flavour creeps in with a citrus note riding along side, coconut and ginger     play second fiddle to the sweetness but still enough to be noticed. A lovely gentle spicy note fades in and out with a little earthy note bringing it all back down to earth.

Thoughts.. This whisky is pretty good on so many levels, a lovely  nose leads you perfectly into the palate, there are no suprises, you get exactly what you expect to get, a fresh dram with a mature complexity to it, the wood has done a great job, lots of natural flavours.