A few days ago I was contacted with regard to an up coming limited release from The Glenturret distillery in order to recognise a long standing and recently retired member off staff.. Michael Jamieson, was a cooper and has worked within the industry for an incredible 44 years.  Michael joined the Clyde cooperage aged 15 in 1971 as an apprentice.. 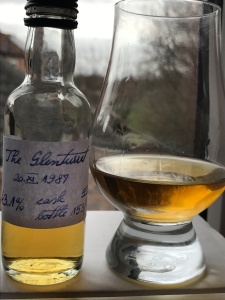 Michael describes the five traits of a cooper in his own words..

TOOLS. “It’s not just Glenturret whisky that is still crafted using traditional tools and techniques. The tools cooper Michael Jamieson used within the cooperage are all traditional tools that date way back to when the Clyde Cooperage first opened in late 1890’s. From a topping plane, jointer, chive to a Jigger…

TALENT.  “It’s a skill that takes many years to craft, with a 5-year long apprenticeship to hone their talents of repairing barrels and crafting washbacks by hand. For Michael, his skills as a cooper were passed down from his father. Working alongside each other in the same cooperage, his father helped nurture his craftsmanship up until his retirement.

TRIALS.  “The job of a cooper is not an easy one, it’s a strenuous and demanding job that requires a lot of physical strength to bound the wood together with just metal hoops. The large wooden washbacks are built completely by hand, requiring a lot of skill to manoeuvre and slot into place. “Despite the hard graft, the end result is really quite impressive,”

TRADITION.   “There’s a whole lot of tradition in coopering, from the traditional tools to the old-aged casks that are lovingly repaired for the next lot of liquid gold. But one tradition still going strong in the cooperage is the unique pass-out tradition. Newly qualified apprentices are officially initiated as a cooper with a slightly messy roll about in one of their creations. “Oh yes, that’s an important part of the passing out,” laughed Michael, remembering his own experiences”.

TALES.  “Coopers are a rough and tough bunch” says Michael. They’re all passionate and dedicated craftsmen who take pride in their work. After 44 years in the whisky industry, Michael has hung up his tools and retired to the home of whisky, Speyside, where he can tell tales of his time as a cooper over a wee dram or two. “I’ll certainly miss the banter” he says. “It was good fun, really rewarding and I’ll miss getting out and about visiting lots of distilleries and meeting people.”

Looking at the sample received I will assume no colour has been added and shows off a lovely deep golden straw tint..

Nose.. Quite fruity with gentle oak notes and all wrapped in a gentle spice blanket.. The first thing noticeable is fresh fruits, apple, pear and oranges, a fresh honey aroma comes along on the back of a little caramel and roasted almonds. A gentle cinnamon and ginger note rises through and mingles with that seductive oaky note that rounds the nose off very well.

Palate.. A lot more oak and spice than the nose suggests, the ginger and hints of pepper prickle the mouth while the oak coats and prepares you for the delicate fruity notes that try to muscle in.. Honey, toffee and a hint of chocolate fruit and nut bring the flavours to an end.

Thoughts.. This is quite a pleasant dram and shows it’s age through the mouth while the nose still feels youthful. The finish is very pleasant and keeps you licking your lips.. There is certainly plenty of complexity to this malt along with great balance.

This expression will be released on the 1st of March and the price will be..

Thanks go out to The Glenturret distillery for the official sample.