Balvenie whisky and Steve Rush (@thewhiskywire) just held an amazing live tasting on twitter and I once again had the extreme privilege to be included on the night.. The tasting was to be held in support of The Craftsman Dinner which is held each year by Michelin starred chef Michel Roux and the Balvenie to honour the craft enterprises of Britain..

On the night 3 excellent crafts were honoured..  A unique cheese from The Urban cheese maker ( Wildes cheese ) from Tottenham, Bermondsey honey which is produced on the rooftops of London and Chocolate from Pump Street Chocolate and Bakers from Suffolk.. Each of these craft products were paired with an expression from the Balvenie core range which were intended to compliment the produce to perfection..

The whiskies poured on the night were the 12 yo Balvenie Doublewood, 14 yo Caribbean Cask and the 17 yo Doublewood..

First up on the night was the 12yo Doublewood, matured in American oak for the majority of the 12 years before having a ” finishing ” period in the finest sherry casks.. This expression was the creation of David Stewart, The Balvenie Malt master, and has been part of the core range since the early 90’s and is extremely well thought of in the whisky community.. Bottled at 40% abv..

Nose.. You instantly find those succulent dried fruits, candied orange and dark chocolate with rich honey, vanilla and a little cinnamon.. The spices get more pronounced with time, cinnamon, ginger and nutmeg all come alive along with subtle tobacco notes..

Palate.. This starts off with soft spices that mingle with those dark fruits, burnt sugar, honey and hints of pear and green apples, again you pick up subtle tobacco notes, dark chocolate and fresh coffee grinds.

Paired with the Bermondsey honey.. 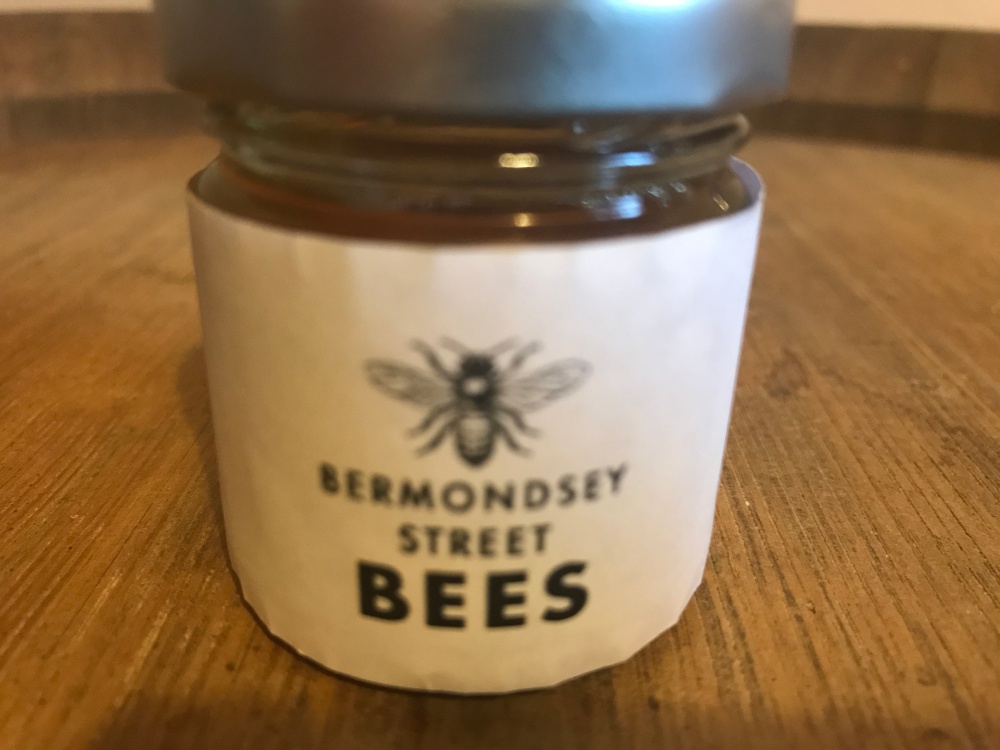 This honey was just perfect to enhance the sweet notes of the 12yo and really did compliment it.. The honey itself had wonderful rich notes with a soft earthy touch.. Very nice..

Second whisky on the night was the Balvenie 14yo Caribbean cask, once again this is Balvenie whisky that was matured in American oak before being given a “finishing” period in casks that had held Rum made in the Caribbean.. Bottled at 43% abv ..

Nose.. Dark fruits with rum n raisin chocolate.. old leather and spices galore, the cinnamon just shines in this with fresh ginger and a little pepper in the background..

This whisky was paired with the cheese from Wildes cheese. This cheese was initially given a wash with the whisky during the manufacturing period and so has already taken on some of the Balvenie  notes..  This cheese also just complimented the whisky bringing out extra notes and highlighting the softer notes hidden underneath the spices.. (very good on crackers too )

Last up on the night was the Balvenie 17yo Doublewood, as with the 12yo this was initially matured in American oak before receiving over 5 years in sherry casks as a prolonged finish..

Palate..  You have to love the palate on this.. elegant sherry notes that just explode in the mouth, dates, raisins, candied orange and liquorice, dark chocolate with vanilla, toffee and burnt sugars.. 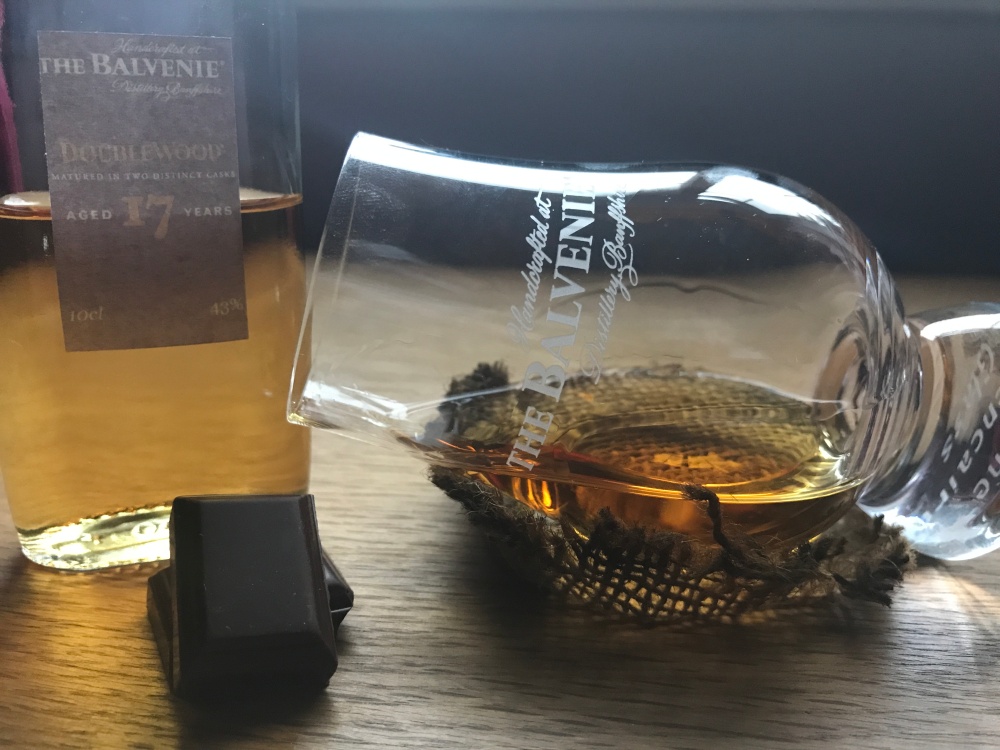 This was paired with the dark 80% chocolate from Pump street bakers and chocolatier with Finca Tres Maria’s beans from Honduras and boy did this just marry up perfectly with the whisky, the dark chocolate notes just made the whisky come alive and really sent the senses into overdrive.. 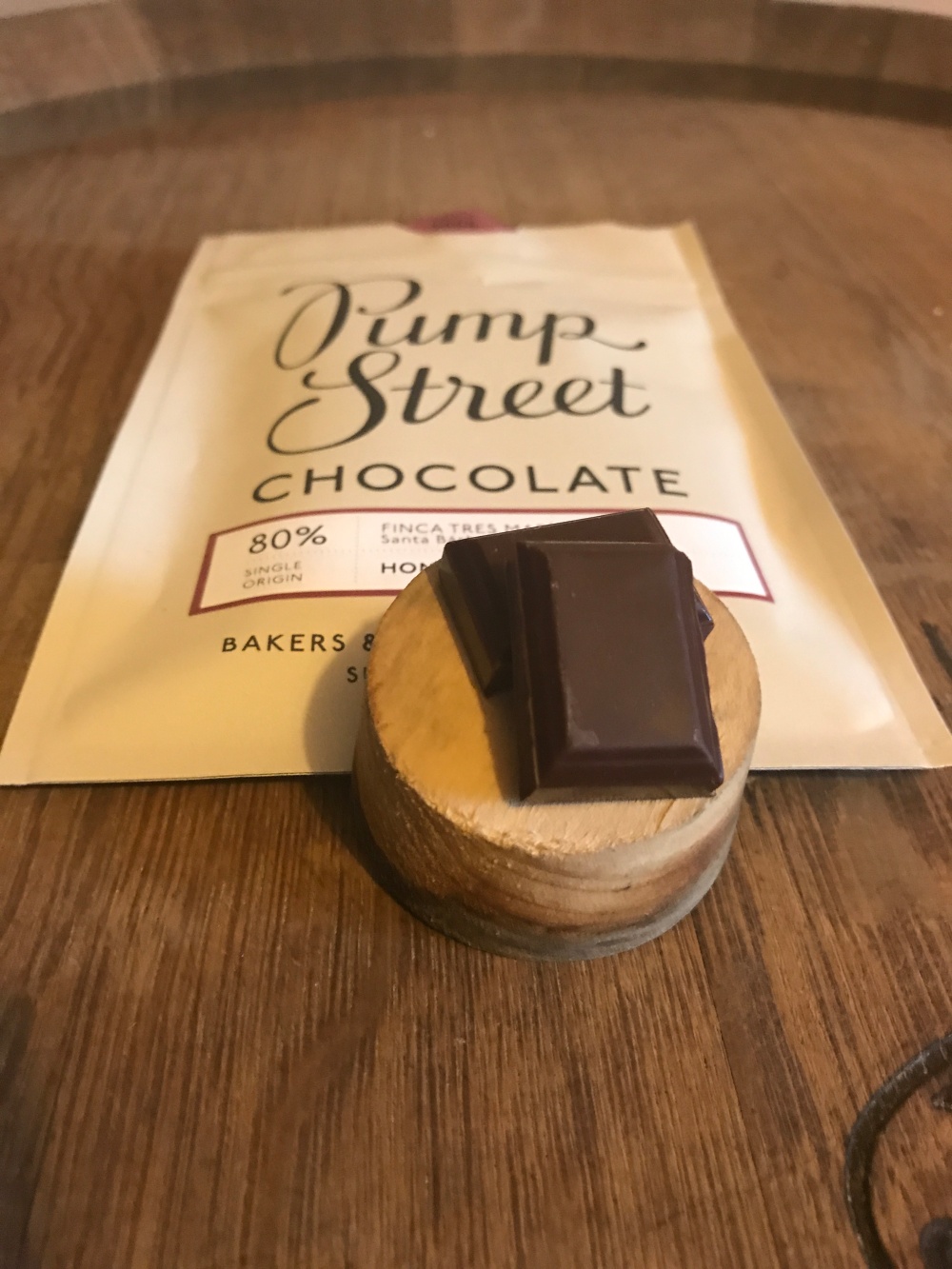 Thoughts.. Firstly I have to mention the fantastic way the Balvenie sent us everything, a beautiful wicker basket arrived containing the samples of whisky and the additional food pairings.. ( see pics)  so well done to the Balvenie for really making this tasting a rather elegant affair !!

The whisky on the night can not be faulted., The 12yo is one I always have on the shelf and will gladly pour a dram knowing that I will enjoy every sip.. This is one of those drams that help to get new people into whisky and the fact it has been one of the best selling expressions for the Balvenie says it all..

Another fantastic tasting arranged by Steve Rush from the online whisky site “the whiskywire” and “tweettastings” that really raised the bar yet again, there is no wonder these tastings are getting so popular these days when we are treated to an evening like this.. So let me say a real  if thank you to Steve for the opportunity to take part, Alwynne Gwilt (The Balvenie Ambassador ) for all the info and banter on the night, The Balvenie of course for their generosity and to the 3 fantastic crafts highlighted on the night..

Info for each of the crafts can be found below..

You can also find a selection of short films highlighting the crafts and Balvenie whisky here.. 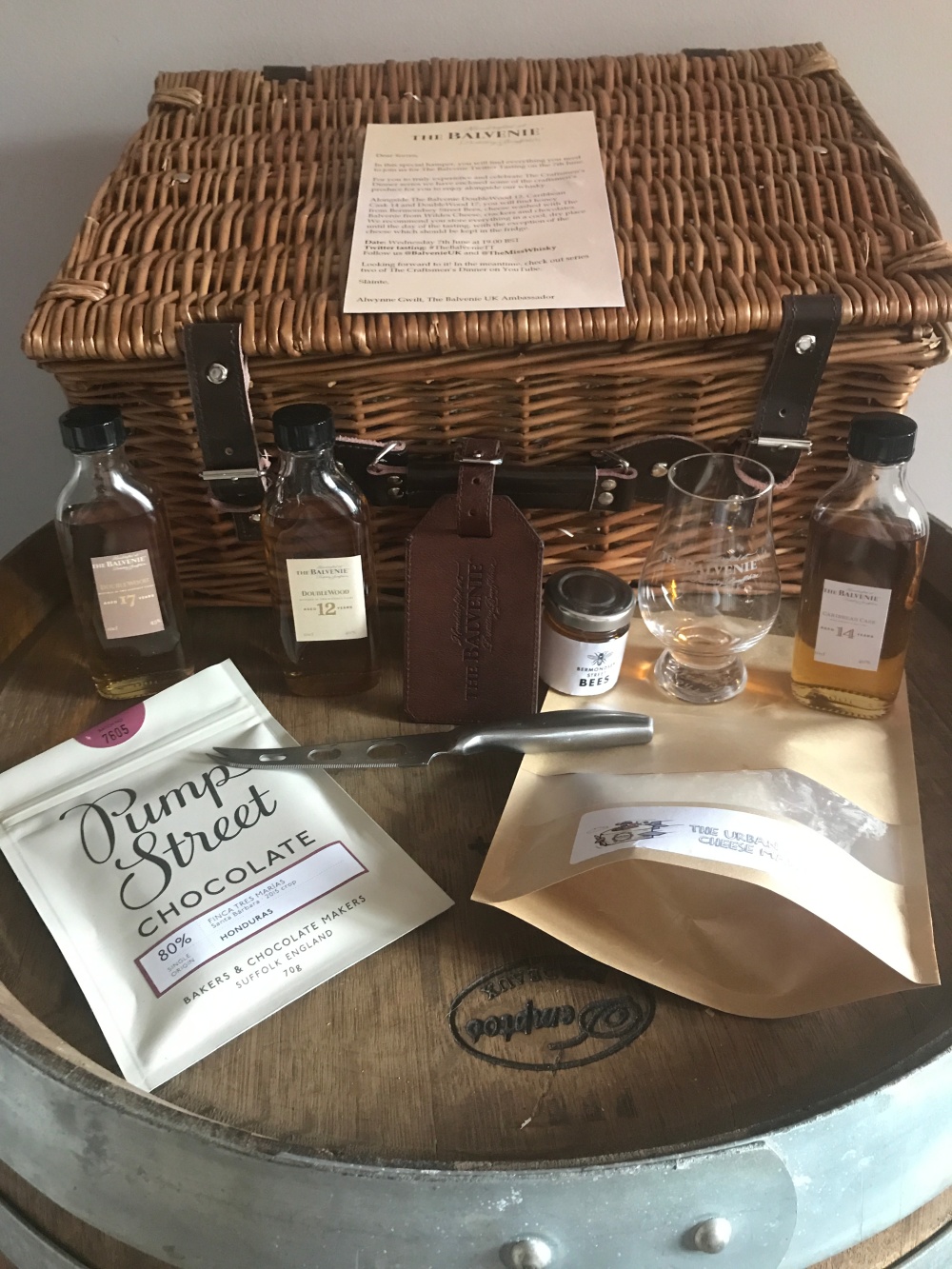 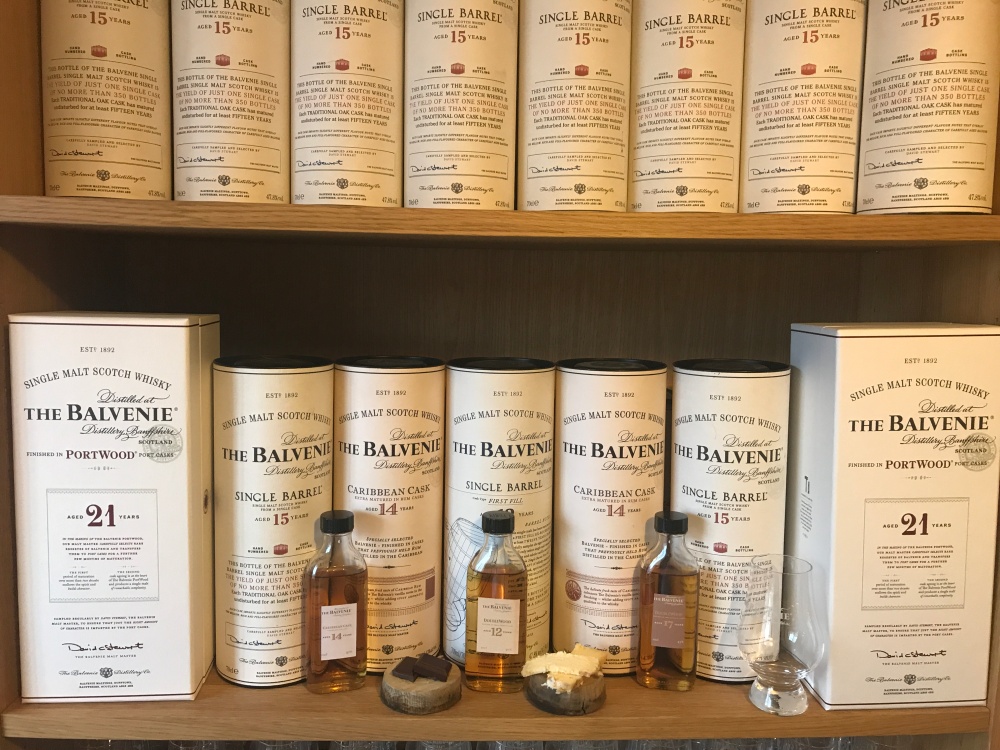 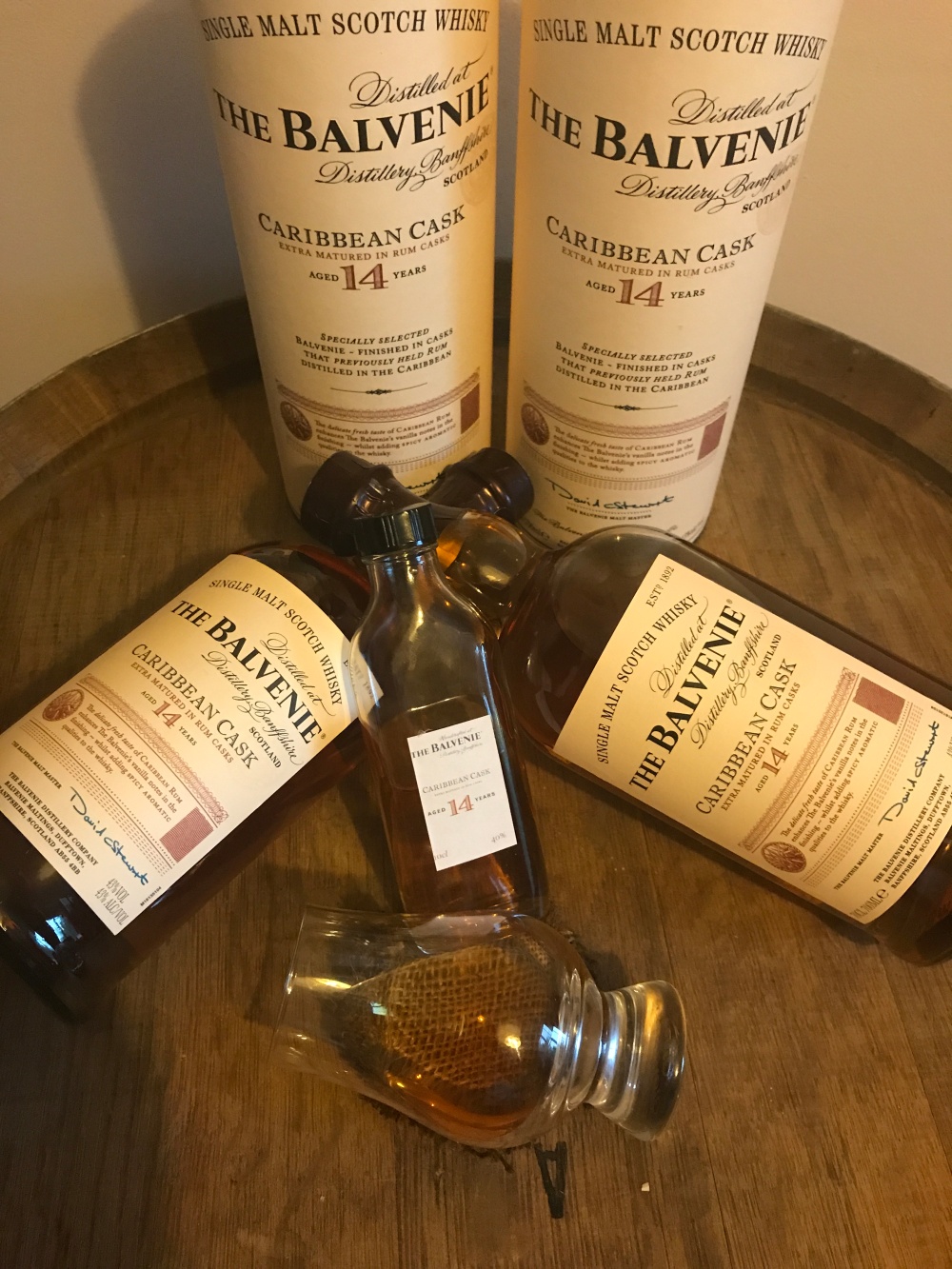