Glenfiddich Distillery “ Valley of the deer “ was the dream of William Grant, in 1886 he along with his family ( seven sons and two daughters ) by his side he set out to fulfil his dream and build his distillery.

Built by hand stone by stone it was to take a full year to fulfil his dream and on Christmas Day 1887 the first spirit ran off the still.

In 1933 Williams Grandson joins the business during the Prohibition period and does the surprising thing of actually increasing production, as the law changes towards the end of the decade Glenfiddich  are one of only six distilleries still operating, but with the increase in production they were ready to meet the demands of an increasing popularity of whisky.

By the end of the 1950’s Glenfiddich boasted having its own Coppersmiths and dedicated cooperage on site, which is still in operation today and is indeed a rare site..

1991 has the distillery releasing its first 50yo whisky, matured in nine casks laid to rest in the 1930’s this very saught after bottling is an extremely rare and collectible bottle indeed. A mere 10 years later a single cask #843 was bottled and released at an astonishing 64 years of age,  with only 61 bottles worth of whisky left in the cask ( not even one for every year of maturation )  the distillery shows it is still one of the main powerhouses of the whisky industry.

Now under the watchful eye of Master Blender Brian Kinsman who was taught by the Master himself David Stewart the distillery continues to produce an extremely consistent malt whisky that is loved around the world.

With a capacity of around 14 million litres of alcohol per year the impressive 32 spirit stills housed in one building produces some of the most recognised whisky produced today. 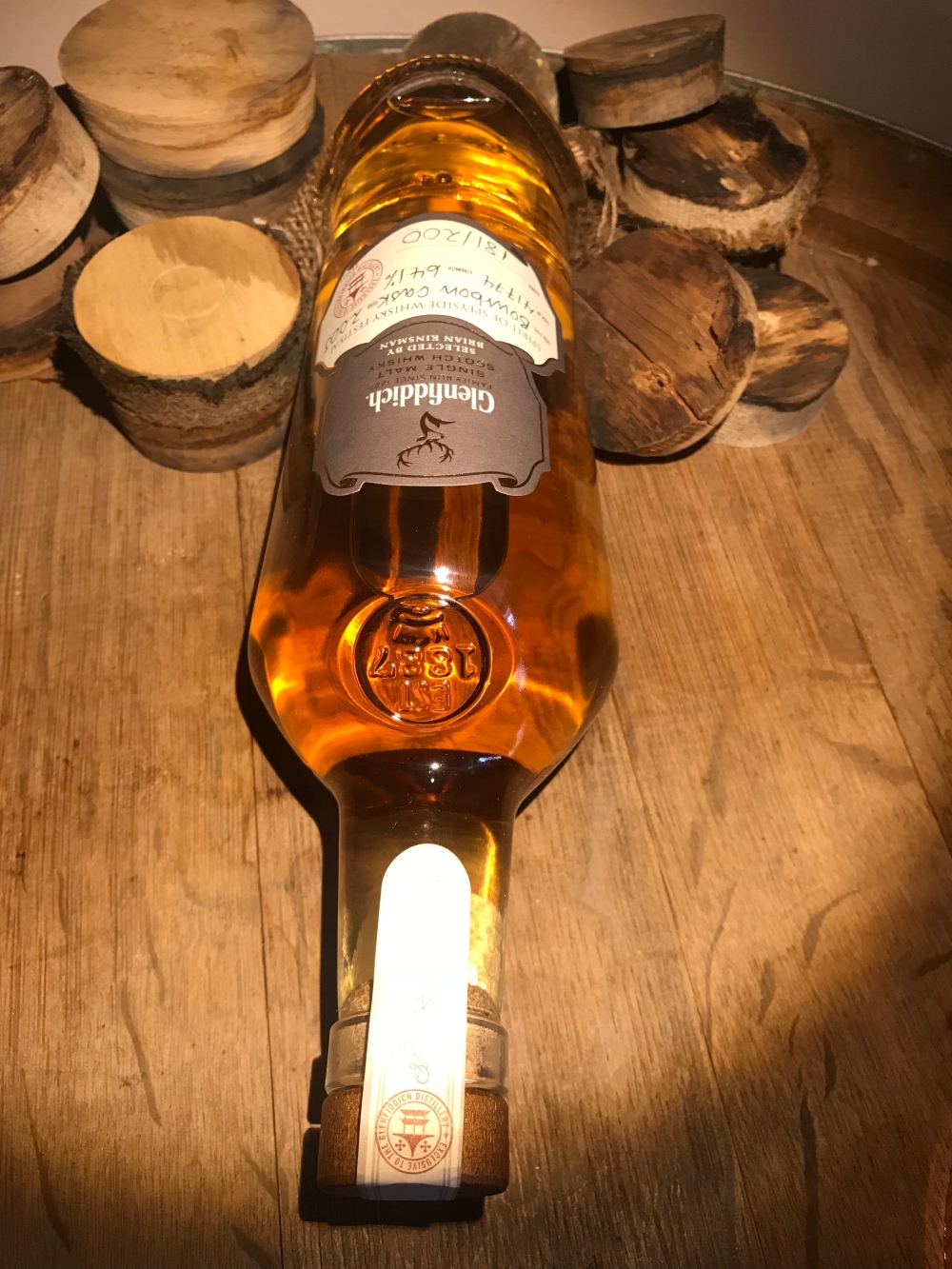 Todays review is another stunning expression from the Glenfiddich distillery,  during the “Spirit of Speyside “ festival 2018 the distillery offers the opportunity to bottle a unique single cask which as lovers of the distillery will know is quite a rare thing. Visitors to the Distillery generally have the chance to bottle the 15yo Solera at cask strength which is offered in batches but this expression is a one off single cask..

Bottled at 64.1% abv this single Bourbon cask #41774 was laid to rest in 2005 and was bottled in May 2018.. Naturally coloured and NCF this is the finest form of any distillery, as Straight from the cask is the finest way of telling it’s own unique story.. with only 200 bottles produced I have bottle 181..

Nose.. There are the typical “ Fiddich” notes of pear and fresh apple alongside vanilla, caramel, heather honey, soft spices and subtle coconut notes.

Palate..  Vanilla sweetness and fresh fruits lead the way with typical flavours like pear, apple and a little tropical note showing off the fruity side of Fiddich, spices are showcased well with cinnamon and a little pepper giving this a nice kick.

Finish.. A touch of oak and lingering spices. 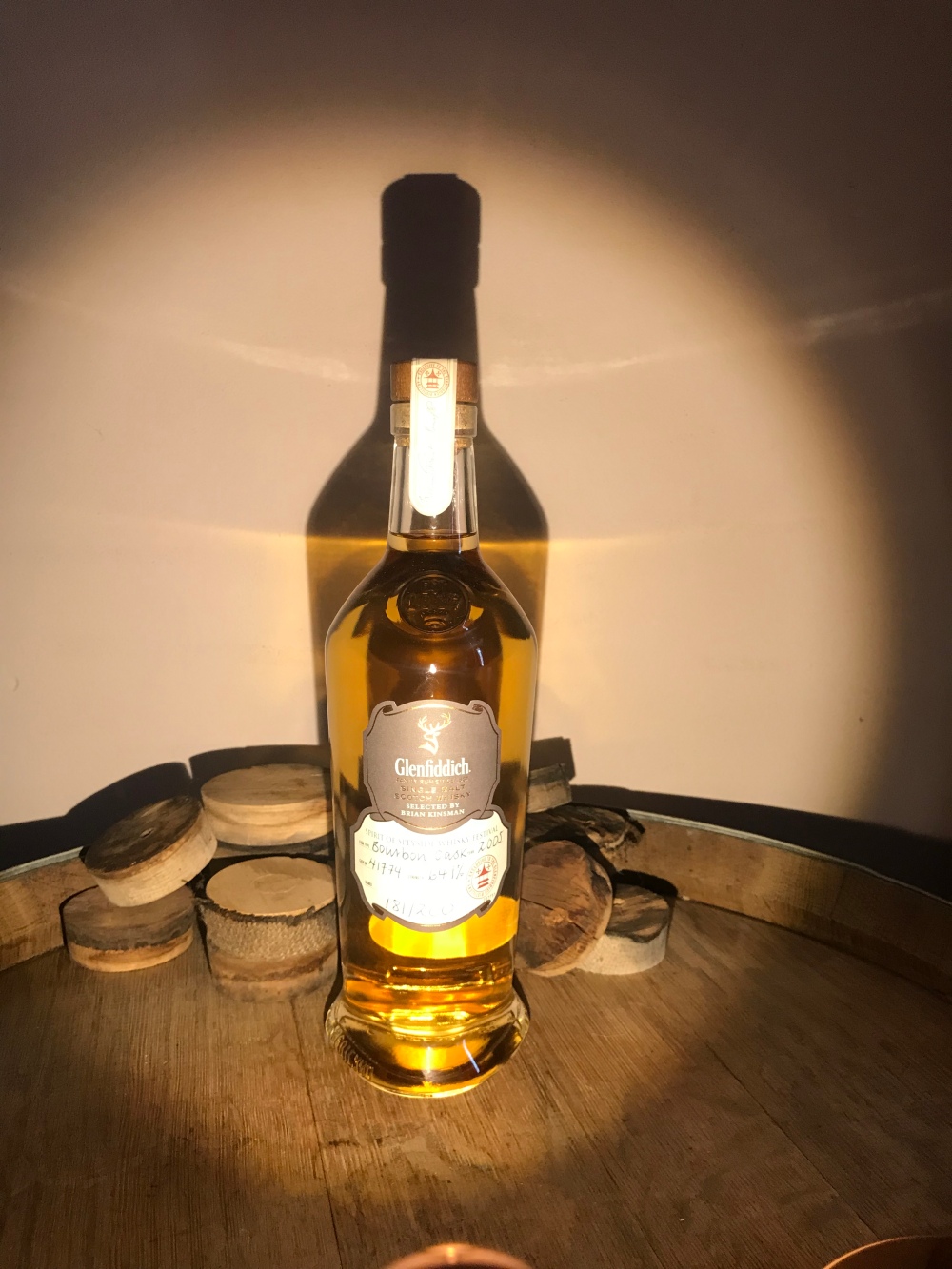 Thoughts.. Do I like Glenfiddich, you bet I do, so it will come as no surprise that I rate this rather well too..

Single casks always tell us a unique story of the distillery and it’s profile and this is no exception,  although very typically “Fiddich” showcasing the fruitiness this also shows its own uniqueness, a nice spiciness that is enhanced by the high abv.

I have always had an affinity with Glenfiddich, this was the first brand of single malt I ever tried, and kind of got me hooked onto single malts..

Today my passion has grown and it’s always a pleasure to re visit Glenfiddich when the whisky is as good as this..