I’m not sure my guests today actually need any introductions but for those of you who live on Pluto these two guys are probably considered as God’s in the whisky Vlogging world !!

Now although this series is aimed at those working within the industry I offer no apologies in including “ The Scotch Test Dummies” as these two do as much for the industry promotions as anyone out there can ever do.. You might not love the style but they give great advice and honest opinions in a rather wacky way sometimes but hey, we are all a little wacky..

Please introduce yourself.
My name is Scott, 1/2 of the Scotch Test Dummies. Bart and I do whisky
reviews on Youtube. You can find out more on YouTube or our website
scotchtestdummies.com

How long have you been doing the video vlogs and what gave you the
initial thought to do them ?

( Scott)
Bart and I posted our first review (Caol Ila 12) on October 18, 2013 so just
over 5 years now and 500+ reviews. Two things got us started. The first
being that Bart did board game reviews on Youtube already. The second
was that when Bart and I were at work talking and telling stories, co-
workers would come in and listen to us banter all the time. We said if we
could do that with whisky that it would be a blast! And it is!

I actually started in 2009 doing board game reviews for a YouTube channel called The Dice Tower…Scotch Test Dummies was born October 18th 2013.  Scott, my co-host knew I was doing board game reviews and one night we were hanging out sharing some whisky and he brought up the idea in a semi joking way of filming whisky reviews.  That stuck in my head for a few days and when I saw him next we started to make it happen.

Have there been any regrets or times you have thought about giving
up ?

(Scott)
Not yet! The first couple of years the growth was slower than I had
expected, but we knew we just had to keep producing content and getting
our name out there.

We are grinders.  It can get a little tiring at times and I can get on Scott’s nerves…I’m a bit odd and wear Manga shirts. We both have full time jobs and families with a lot of kid activities. But we have always loved hanging out together and I love creating things…and there is all this delicious whisky to try. 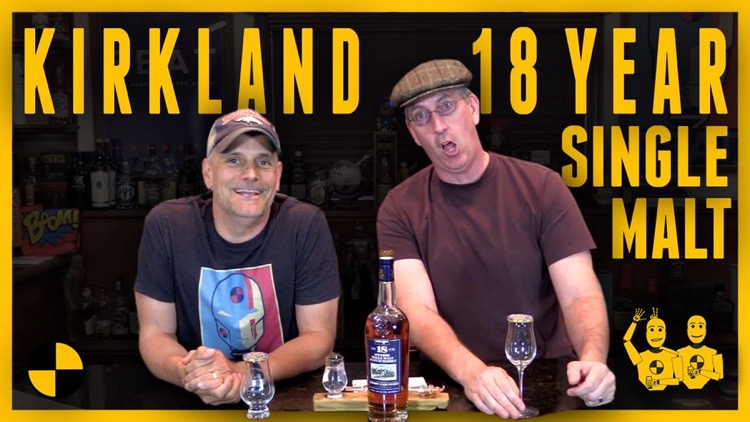 Can you tell us about your day to day job and how the vlogs fit in
around them ?

(Scott)
We both work for the same company now which is where we met in 1995.
That company has a pretty strict social media policy so at this point we
aren’t putting out there what we do, but in a few years we’ll be eligible to
retire and then we’ll let everyone know.

Scott and I both have a military background and currently work together in another field.  We don’t mix our day job and our whisky work.  People know we have a show but we keep both worlds pretty separate.  We have the same days off and film when we can.  Releasing two to three shows a week keeps us busy.

What has been your biggest highlight with the vlogs to date?

All the people we have met and made friends with.  The whisky world is so friendly and inviting.  We now have friends around the world.  Technology has literally shrunk time and distance for me.  I will physically meet a person I’ve known for a year or more virtually and even though we have never shared the same physical space it’s as if we were just hanging out in person a few days ago.

What does whisky mean to you both ?

(Scott)
I never even drank whiskey until my late 30’s when my wife bought me a
bottle of Johnnie Walker Black because it was on sale. I didn’t drink
scotch or any whiskey for that matter except maybe mixed with Coke.
Since she bought the JW for me, I thought I might as well try it and now
here we are! I love the differences that whiskies bring from region, to age,
to caskings! Whisky to me is really a “tie that binds.” I’ve already
witnessed whisky bring so many people together with one goal…to share.

For me whisky is fellowship first and flavor exploration second. When we started the journey I had a premonition of an epic journey.  Like Frodo and Sam stepping out of the Shire.  Really.

What is it that you enjoy the most about the doing the vlogs ?

(Scott)
To me, shooting the reviews is the most fun. All the work happens off
camera from editing, pictures, creating thumbnails, descriptions, tags etc.
Then there’s social media…Twitter, Instagram and Facebook. We need
interns to do all of that for us!

Hanging out with my best friend and drinking whisky, in the most creative way possible. 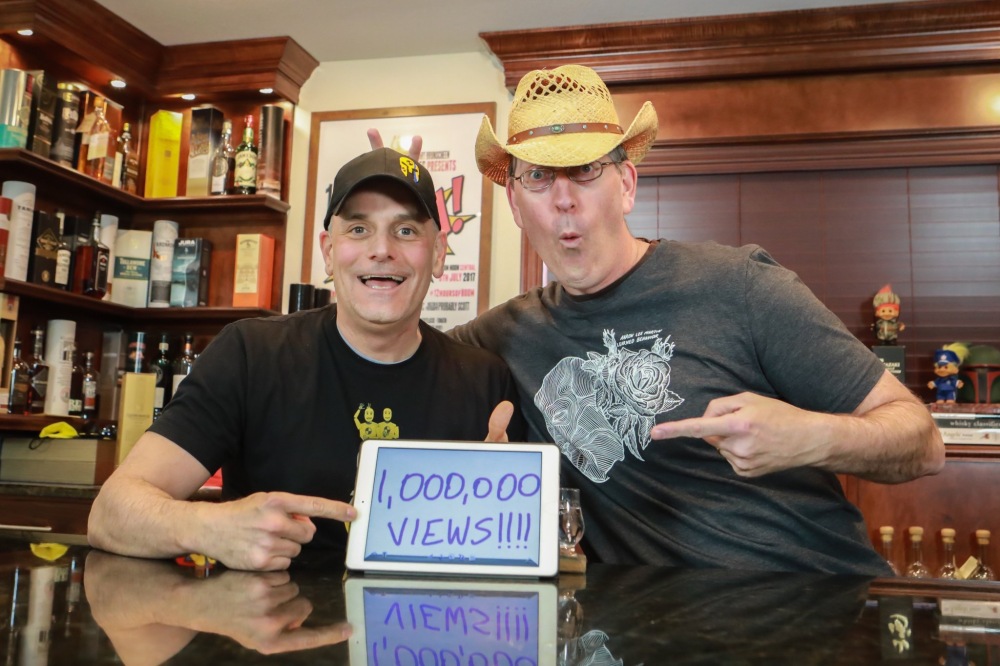 What’s your favourite time and place to enjoy a dram?

(Scott)
I love to sit down after a day of work when the family is all in bed and its
nice and quiet with no distractions. I’ve found this is the best time to truly
analyze a whisky and be able to focus on it.

Everyone in the house is asleep.  I put on some light newer folk music and just sip away.  I can spend an hour sipping and nosing an ounce of whisky.

With all the NAS and various cask finishes available, what do you
predict to be the next big innovation in whisky?

(Scott)
I don’t know if I’m “deep” enough into the whisky industry to know or
guess on that. I love both experimentation and the old die hard method of
time. We were recently talking to a Texas distillery and it gets so hot there
that most whisky doesn’t age more than 3 years because of the impact of
the heat on the casks. This distillery is even trying things like only filling
casks half way to decrease the wood to whisky ratio.

I think American Single Malts will become an official category.  And it will be huge.  There will still be room for all kinds of whiskey play in America but a defined ‘American Single Malt’ will someday sell as much if not more then Bourbon both domestic and abroad.

Have you got a favourite whisky?

(Scott)
I love sherry scotch with exclusive sherry maturation being my favorite.
Macallan 12 is still one of my favorites. I also love what Glendronach,
Glengoyne, Aberlour, and Tamdhu are doing.

I’m a real peat head.  I love all types of whisky but man…Islay has my heart and soul as far as whisky.  We have yet to travel there but it’s on the to do list.  I’m a little nervous I wont want to come back.

The whisky blogging / vlogging world is demanding, time consuming
but very rewarding but what do you do to relax .
Really the whisky vlog is what I do to relax. Although time consuming, its
still a break from the regular job. I have close to 300 bottles now at my
house and Barts numbers are close to that as well. I love going into my
office and relaxing with a whisky.

I’m a big board game player and I still do board game reviews.  I’ve just chosen to dive very deep into both my hobbies.  I believe authentic passion for your subject is what helps make a good show…the other ingredient is it has to be entertaining. 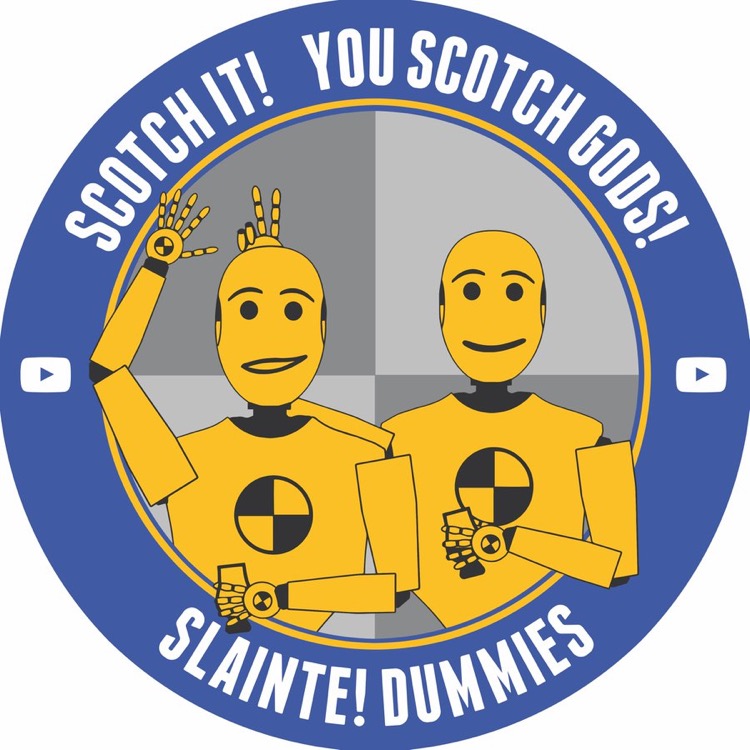 What would be the perfect job within the industry for you both ?

(Scott)
I love where we’re at and what we are doing. I don’t know that I would like
to be tied down to one distillery or one range of whiskies. If we continued
on our path of free lance advertiser so to say would be fine with me.

To continue doing exactly what we are doing but with more world tour type shows.  We have started to be invited to distilleries and we love getting boots on the ground where the ‘water of life’ is made.

What has surprised you most about the vlogs and the whisky world in general.
(Bart)
When I first stepped into the whisky world I actually thought we might run out of whisky to review…what a hoot…there are rivers of brown spirit I have yet to even discover so many of them, let alone, run out.

( Bart)
I’ll make two more wild predictions.  1) As far as whisky is concerned the world is just starting to scratch the surface.  World wide demand and production is going to continue to grow at unprecedented rates…I think it’s going to explode. China and India alone will be unbelievable markets as their economies continue to grow so will their demand for whisky.  I also think many more woman will become big whisky fans.  I’m starting to see this now and believe it will continue.  All of this as whisky making is being recognized and sought after from around the world.  I look forward to watching the interplay of supply and demand on a global scale.
2) I think hobby created media content (whichever form) across all sectors will continue to grow and dominate.  We have a lot of fans and Patreon supporters who say they watch us more then TV.  People are tired of spit and polish production with BS served up cookie cutter fashion.  They want real people, people they can share a dram with.

There is no doubt that these two guys are no Dummies when it comes to whisky.. Great honest reviews with humour, fun in a modest way and very entertaining..
If by any remote chance you have not come across these guys then check them out here …
https://m.youtube.com/results?search_query=scotch+test+dummies