Tobermory distillery  ( this distillery produces both Tobermory and the peated Ledaig )  was established back in 1788 by the British Fisheries Society in a small farming settlement, built around the medieval church at the top of the hill.

Then in the 1790’s an inspired a bold new vision by John Sinclair, a local kelp merchant found him putting in an application for the lease of 57 acres of land on the area known as Ledaig in order to build housing and a distillery.

Although distilling was  banned in Britain between 1795 –  1797 in order to conserve grain stores during the War of the First Coalition with France  his application was rejected and he was only granted permission to build a brewery.

John Sinclair remained true to his original plan and a year later the Tobermory/ Ledaig Distillery was established. 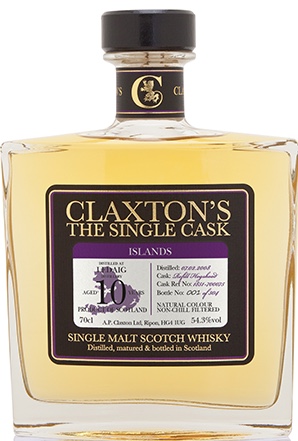 Nose.. Soft smoke rises on the back of subtle vanilla, toffee and fresh apples. Freshly roasted hazelnuts, cinnamon and damp ash aromas finish this off..

Palate.. The smoke effect is instant and ever so prominent.. Eventually there are subtle flavours of butterscotch, cinnamon, citrus peels and a little honey but like so many of the ledaigs this is about that ashy flavour that just takes over the senses..

Finish, Smoke and ash with a little oak..

Thoughts.. When I first tried Ledaig I absolutely hated everything about it ! But thanks to the likes of Claxtons I am starting to really enjoy the journey through the expressions from this distillery..

These single casks of Ledaig from Claxton’s are a fantastic way of understanding just how different each individual cask of whisky actually is..

This sample was supplied as part of a live tasting on twitter from Steve Rush ( The whisky wire )  and Claxton’s independent bottlers..