Dumbarton Distillery started to distill back in 1938 and was at one point the largest continuous producing grain distillery in Scotland, using the continuous column  still rather than the traditional Coffey still..

Unfortunately in 2002 the distillery fell silent before eventually being fully demolished and again stocks today are starting to dwindle.. 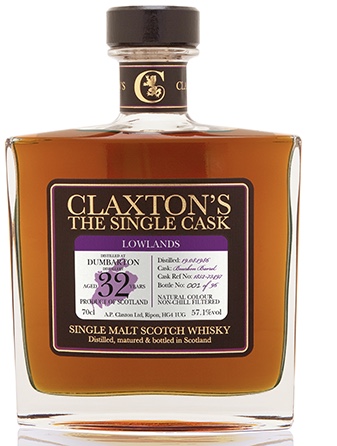 Palate.. Sweet and typically old grain flavours with an earthy touch.. Vanilla, toffee and oodles of butterscotch coat the mouth before the spices come forward with plenty of cinnamon, ginger and a little nutmeg.. Subtle coffee notes mingle with chocolate, tobacco and hints of dried fruits..

Thoughts.. I don’t hide my love for grain whiskies and when you get expressions like this Dunbarton 32 year old from Claxton’s that has sat patiently waiting since 1986 for us to finally savour then it’s not only about the whisky but the history too…

Another demolished distillery that will soon fade into just a memory, luckily for now we have the opportunity to still taste and savour what the lowland distillery has to offer.