There is another name in the Irish Whiskey boom that is starting to gather a following within the fans of Irish Whiskey..

The Chapel Gate Irish Whiskey Company are a company bottling Irish Blended Whiskey, founded by Louise McGuane, a farmers daughter who left her Irish home some 20 years ago and forged herself a career within the drinks industry including a position within the drinks giants Diageo, Pernod Ricard and Moët Hennessey..

Returning home Louise founded The Chapel Gate Irish Whiskey Company..  With a third party distillery producing whiskey for the company and filling casks specifically selected by Louise in order to get a Pacific finished product for the blended whisky they intend to produce..

The company became the first licensed bonder in Ireland’s living memory with the first barrels coming home in December of 2016, in April of 2016 those first barrels of spirit were filled, these barrels are sourced from Louisville, Kentucky and filled with both new make single malt and single grain whiskey..

The barrels are to mature on the west coast of Ireland within a small “ Rack house” specifically built on the family farm.. 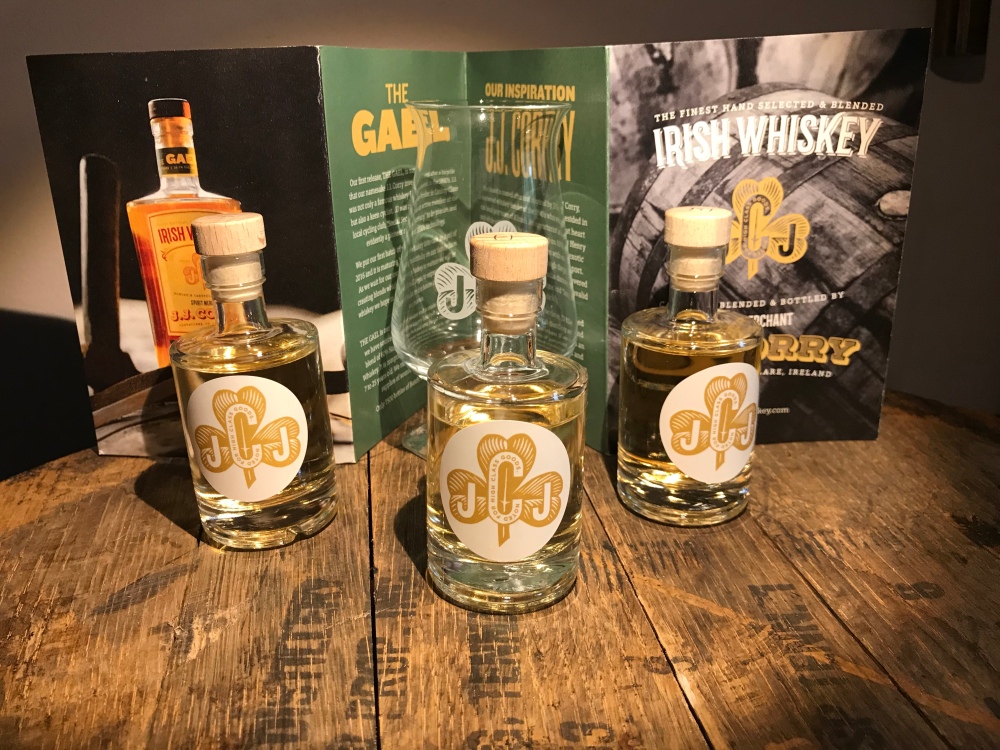 Louise names the brand of Whiskey after J J Corry who himself was a whisky bonder in the 1800’s, located close to where the company is situated, J J Corry  set up  a small shop in the 1890’s, located at 63 Henry Street, Kilrush which was the only place he sold his “Corry’s Special Malt” sold by the glass or jar for 3 pennies..

Not only did he sell “Whiskey”  he was also known for the Tea from India, Rum from the Caribbean, Wine from France and Port from Portugal.. He even invented a bicycle which he named “The Gael” ..

The tasting was hosted by Steve Rush from “The Whisky Wire” who regularly hosts live tastings on Twitter.. This tasting was done in a blind tasting format, no information whatsoever was given.. First on the night was a rather exciting young grain whiskey..

This was NCF and Naturally Coloured.

Nose.. This started off fresh with some nice fruits, lemon peel and plenty of floral notes before a buttery/ corn note surfaces, vanilla and caramel notes can easily be found with a very subtle spice note..

Palate.. A hit of pepper at first before there is an explosion of fruit, citrus notes, vanilla, caramel which gives it a real sweet side.

Finish.. Medium length but a nice mix of sweetness and spice and a drying effect at the end.

The Gael is made up with

Palate..There is more of those peaches  and pineapple notes on the palate with subtle spices and a soft sweetness from honey, vanilla and a hint of coconut.

Finish.. A lingering sweetness with spices.

The make up for this is

Again this is NCF and Naturally Coloured.

Palate.. The freshness is complimented by a gentle spiciness, fresh fruits once again dominate the flavours with a real peach note blasting it’s way through.

Thoughts.. All 3 of these expressions are incredibly flavoursome and rich in inviting aromas..

Irish Whiskey is having a real resurgence at the moment and it’s not hard to understand why when you have expressions like these to explore..

Gentle flavours and aromas really drag you into the glass and invite you to descend into a state of happiness upon sampling these whiskies from the Irish shores..

Bravo.. An incredible start to the business..

With thanks to The Chapel Gate Irish Whiskey Company ( J J Corry  ) and Steve Rush for the official samples and inclusion on the Twitter tasting.