It was that time of the year again when I head up north to the promised land..

After months of planning the time was 4.30 am on Monday morning, the car is packed and fuelled up and it’s time to head to Glasgow..

First stop was Auchentoshan and for the first time I hadn’t actually arranged a tour, the intention was only to pick up a couple of bottles

All good plans sometimes go awry and  with a fairly strict budget for each distillery,  a plan of what bottles I was going to buy I blew it all at the first stop..

Next stop was a visit to Loch Lomond, to say I had been looking forward to this for some time would be an understatement.. After chatting with Ibon who for those unfortunate ones who have not met this guy you are missing out !!

First thing on the agenda was a visit to the hospitality room where over a cup of coffee we chatted whisky..

Once the coffee had gone it was off to the cooperage where Ibon and Andy ( one of the coopers ) showed us round the cooperage and gave several demonstrations on the art of coopering, repairs, rejuvenating and Charing casks.. 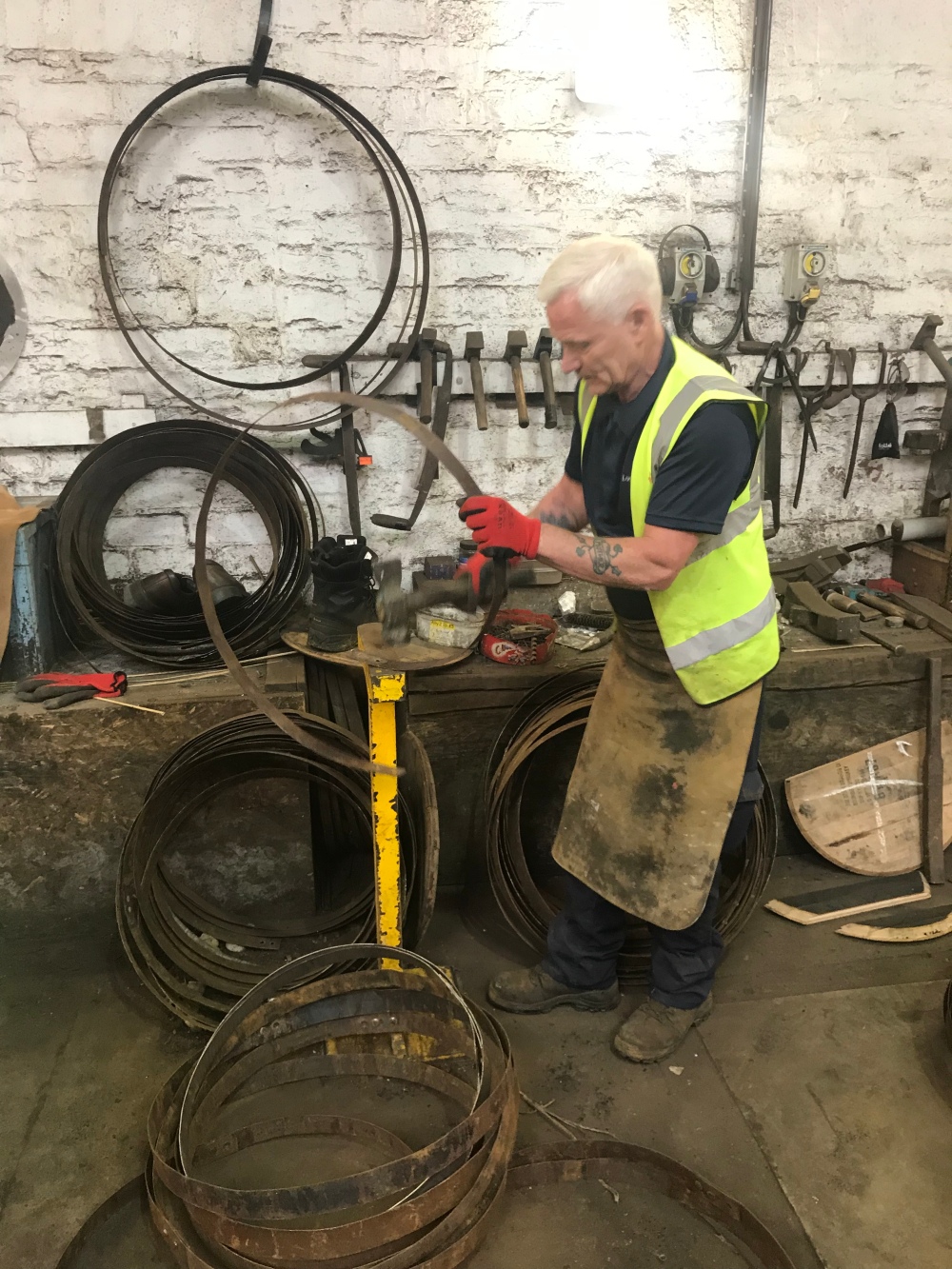 A visit and full explanation of the Loch Lomond process and aims which include predominantly the use of only 2nd fill casks for the single malts in order to showcase the spirit, (most of the first fill is used in the blend) the emphasis is put into the process and fermentation in order to get the desired flavours.. This and other informative facts that were just flowing from Ibon and that made the day so amazing.  Days like this make you appreciate just how much information these guys need to take on board, notes were made, info stored but I know I will have missed a lot more..

A chat and tasting of the new makes just blew our minds with the yeast and process giving such differences.. The process / production of whisky making certainly does affect and alter the flavour profiles even more than some will appreciate and that was so evident, the fact that changes however subtle or extreme can alter the actual flavour profile, add this to the use of typical pot stills, hybrid stills and coffey stills and you have a multitude of styles that can be produced, this then allows the distillery to produce everything they need in order to produce a blended whisky with a multitude of styles..

Next of course was the warehouses, I just love spending time in here, it does not matter if they are Dunnage or rack the experience is still encapsulating. Walking through you always realise the scale of things and it’s always exciting when you observe the different distillery names printed on the cask ends.. The odd cask end showcases the name of little mill and that’s rather exciting..

A tasting of the full range finished off the day ( I was driving so only a nosing session for me ) well I say finished off, it was actually a long chat with Michael Henry and the show of gratitude to Ibon that ended the visit.. The tasting was full on and eye opening in the fact once you have heard the full story and taken on board all the extra information you really do appreciate the whisky drinking experience far more ..

From the blended whisky to the mighty Inchmurrin 1992 there was a real intensity to each dram..

Tuesday was Balvenie day,  although this had been on and off more times that the tv it was still going to be a great visit and  of course the chance to stock up on the BYO single casks.. Now I assumed this would be the same tour as always and with the increased price ( now £50 ) I was disappointed to arrive to “please wait outside until we are ready to go”  No coffee or the usual chat in the office ( the general greeting for everyone !! ) the tour was fine but I’m guessing the warehouse 24 special dram is now also not a part of the tour..

Wednesday had us back on track with a trip to Mortlach and a great tour and plenty of new information to spread to people when at the festivals. We then headed  to Gordon and MacPhail for a little retail therapy..

Wednesday afternoon and only one thing was on my mind,  a trip to Glen Moray and a great chat and look round with Iain before a tasting of the impressive cider cask, 1998 Px, 2010 peated px and the current BYO peated cask and the 2001 re fill Sherry BYO which then lead us to the purchasing of several bottles including the truly awesome 1998 PX finished and the current BYO 2001 2nd Fill Sherry cask ( there are 3 available but I only had eyes for the oldest one )

Thursday meant a trip to Glenallachie where Karen ( formerly of Glendronach) greeted us and showed us round, it’s always nice to reacquaint with people who you have met on previous trips..

Thursday afternoon had us aiming for Tele tubby land.. Sorry I mean Macallan where instead of walking into a wonderful history packed distillery that embraces the past we walked into what can only be described as a shopping centre style entrance and into a reception area that just resembles an airport or hotel lobby..

Now I hear the Macallan fans screaming at me that this is the future and I get that ! But it still does not take away the fact it will take some time to get used to it..  There is a feeling of something grand and extremely modern but at what expense, I for one felt very much out of place and just had that feeling of not being the right clientele..

Back to a distillery with atmosphere and true history and a visit to Aberlour.. Now we had met our guide Nicola at Glenallachie where on the tour round we chatted about Aberlour and she very kindly offered to show us round and this was even her day off !! Nicola is a real enthusiastic young lady and her passion is second to none,  the pride she showed about working in a distillery where her grandad once worked was very evident..  She even thanked us for coming but the pleasure and gratitude was all ours..

Friday was rather different as we had to go home early and the planned trip to Fettercairn was in jeopardy, luckily the road home actually ran within a few miles of the distillery so we de toured and kept our appointment and thank god we did.. Stuart the distillery manager was superb, the tour was so interesting with so much information and a lot of eye opening techniques..  Did you know they use a technique of cooling the stills with a water cooler around the neck ? The fact the green colour from the stills is emulated in the colour scheme on the packaging and all around the distillery also the lines upon the bottles are mimicking the water running down the stills..

A nosing from several casks and a run through the line up and a chat with the stillman ended the tour in style.

This trip will be fondly remembered for several reasons including plenty of laughs, a lengthy discussion about barley (you knew it would pop up) yeast and how the process effects it all, great whisky, great people and of course the odd absentee..

And with that the trip was officially over..

( Above ) Michael Henry with Myself and Ed after a great chat.

(Below) These two were not shy !! A quick look round Glenrothes and we found two chaps that were very happy to pose for a pic or two.. 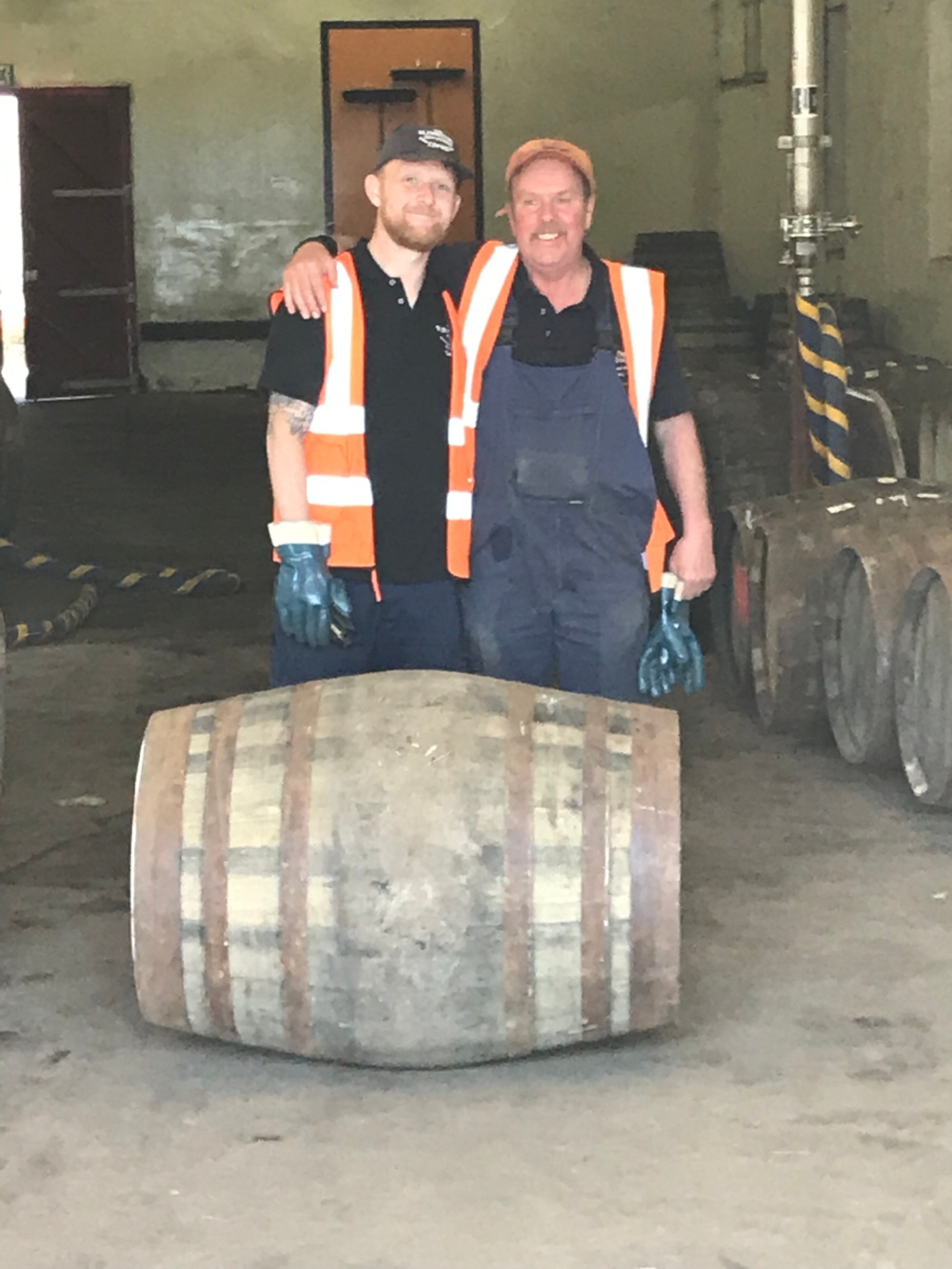 (Above) One of the warehouse guys collecting samples at Glenallachie.

(Below) Re Charing a cask at Loch Lomond.. Pretty intense but where’s the Marshmallows ? 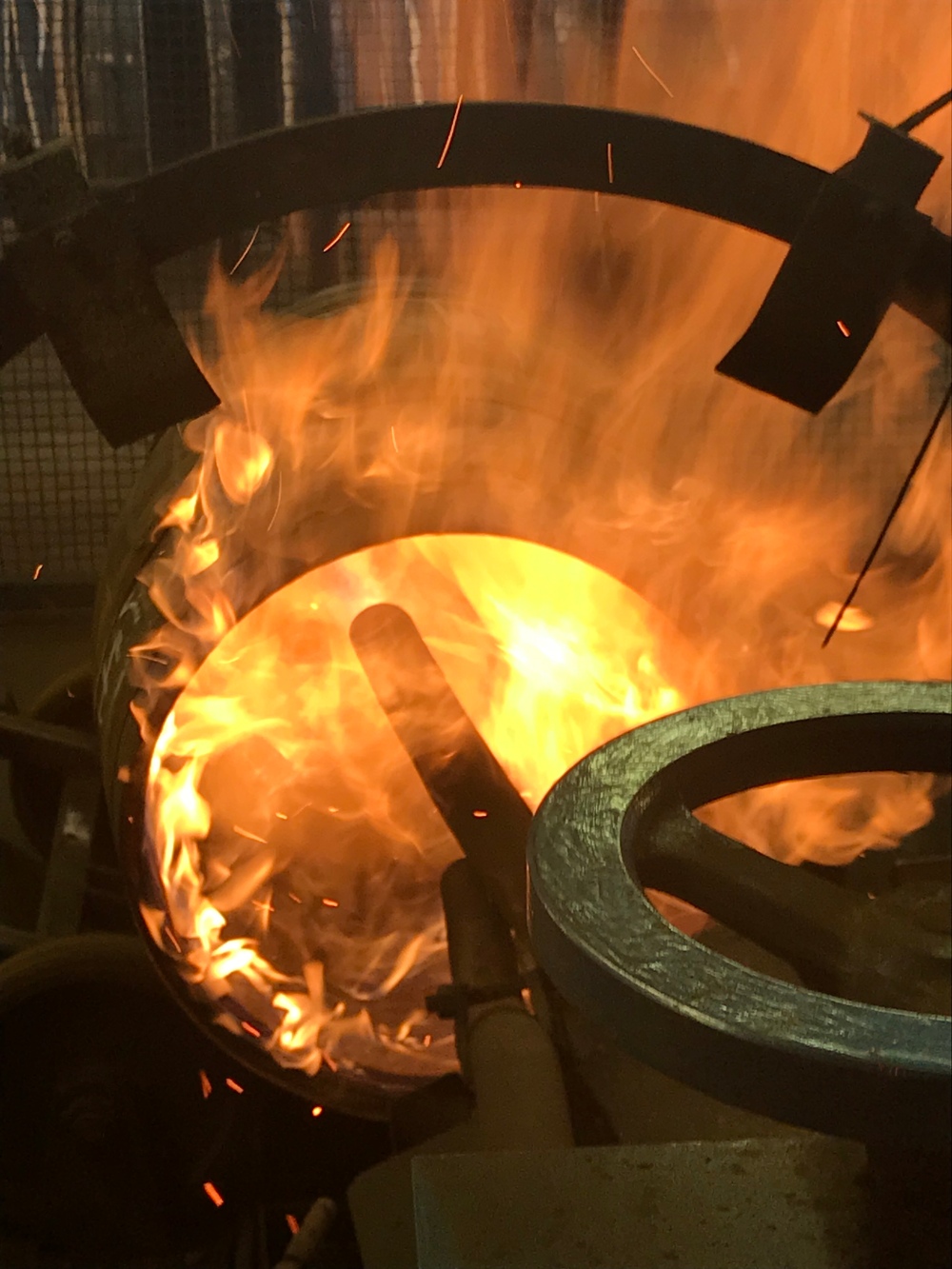 To everyone involved in making this trip so memorable I offer my gratitude.. Hopefully I’ll see you all again next year..