Most of us have heard the stories of secret groups and organisations that are filled with mystery and intrigue but in a world of whisky where transparency is being hailed then do we really need a secret club or organisation?

Lets start by setting the scene..

Whisky Illuminati introduces itself as an exclusive society, where Expertise, resourcefulness, intuition and cunning are all harnessed for the relentless, single minded pursuit of the world’s most exceptional, most scarce single malts. Whiskies that are as unique and distinctive as those who seek them out!

I’m not sure we need “exclusive” societies in whisky but we all know it happening and I suppose it’s all about how we perceive the word “exclusive” .. In this case it seems it’s all about the wording and a way of making you feel like you are part of something special, dark and intriguing society that needs to be kept a secret..

I first noticed the society a while back (several months ago) and logged in to see just what it was all about. Logging into the website you do get that feeling of being a part of something dark, something that is whispered behind closed doors, but don’t worry you don’t need to dress as a chicken, dance around in some strange initiation ritual or sacrifice virgins to the whisky god ( well I don’t think you do ) .

This society and I will call it a society rather than club as this is what they have set out to be, have already released a series of exclusive bottles which have a rather interesting concept for attaching the label, the use of some old style string and a wax seal all add to the mystery and of course help to give a little more elegance to the package.

That said is it all another gimmick ? I’ve touched on the antics of some distilleries and bottlers that are just trying to add extra pounds to the price tag and all that really matters is how the whisky actually tastes, the packaging is a visual sale and while still very important to some it’s a waste of money while to others like myself it’s the eye catcher, the thing that draws us in ( it’s like food, if it don’t look good we don’t want to eat it !  )

The next question to answer is to say what it takes or costs to be a part of this society.. Well from my experience it’s rather easy, go to the website, enter some details, and you are in.. That’s right no membership fees, no initiation process, just watch out for the releases and that’s it..  ( https://whiskyilluminati.com ) 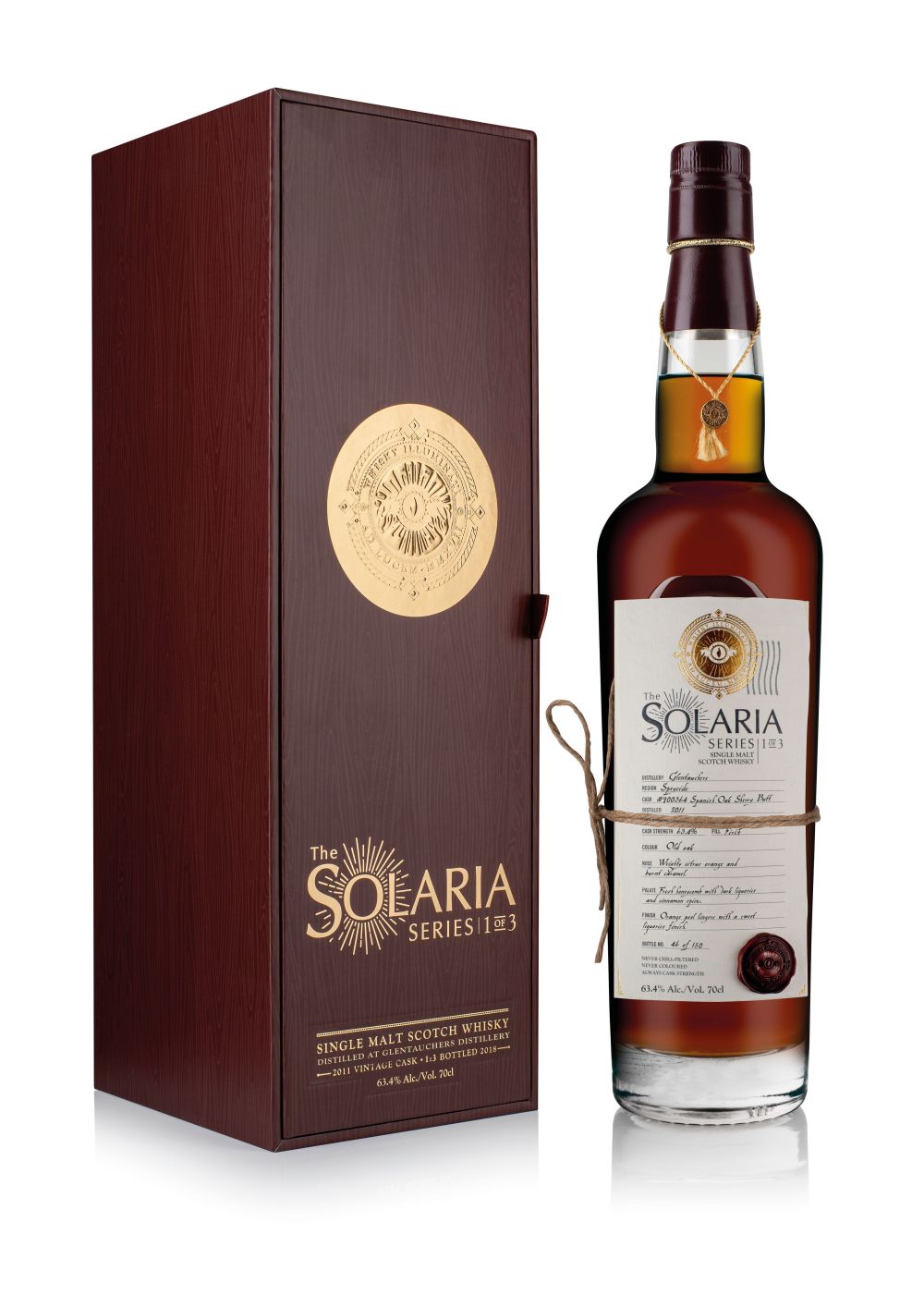 Well lets take a look at what is actually important here..

A week or so ago I was invited to take part in a live launch for this new Solaria series  which is a fairly unique concept in where 5 whiskies have been chosen ( all single casks ) but these will be released in 3 stages, all 5 Casks have hailed from Sherry casks, 4 x Oloroso Sherry butts and one Oloroso hogsheads..

Each cask was filled in 2011 from 5 different distilleries ( Glentauchers, Aultmore, Craigellachie, Royal Brackla and a secret Distillery from Speyside that has been named “Artis Secretum “ that is famously known for withholding its name from independent bottlers labels !!

The remaining  whisky will be left in the original cask to mature until 2021 when batch 2 will be released then in 2023 the final release will be available. Each bottle bought in batch one will have an option to reserve the next batch in order to enable you to get the set !!

Nose.. An initial burst of dried fruits is soon joined by chocolate, orange marmalade and Turkish delight the good stuff with a dusting of icing sugar.. Soft spices waft about with a subtle vanilla note riding on the crest of the wave of aromas that excite the senses.

Palate.. A little oak leads you into spices and dried fruits before that chocolate note  comes crashing in..  A nice jammy note shines along with a citrus bitterness, toffee apple and a little glacier cherry and  Bakewell tart.

Thoughts.. There are some interesting subtleties within this cask that let the more delicate floral notes come through but it still retains a dominant Sherry side..

For a younger whisky this certainly feels very well balanced and does not show any rough edges which although does disappoint it shows the cask is already doing its magic and if bottled right now I don’t think anyone would have been surprised..

My first sherried Glentauchers has not disappointed..

This is available from Master of Malt and comes with a RRP of £120.

Sample obtained as part of a live launch from Illuminati.