W & A Gilby and The Birth of Redbreast Irish Whiskey

Some things are meant to be and Redbreast Single pot still Irish whiskey is one of them..

The Redbreast Whiskey brand is the largest selling single pot Irish whiskey in the world and can trace its origins back to  1857 when W & A Gilby, one of Ireland’s finest whiskey blenders started selling his wares.. 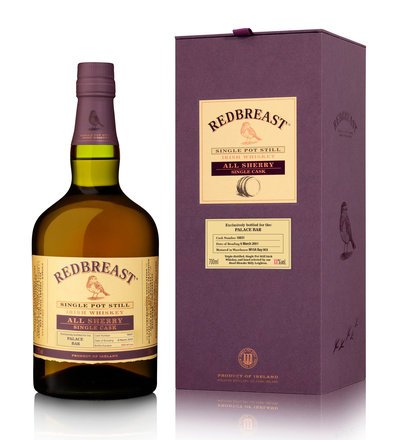 W & A Gilby started a venture from the small basement cellars on the corner of Oxford street and Berwick street in London, within a few years the company had grown to having branches within cities like Dublin, Belfast and Edinburgh.

As with most spirit sellers of the time the company was very successful with selling wine as well as spirits and within their premises at 31 upper Sackville street  in Dublin they carried stocks of over 140 different wines and an estimated  700-1000 wine casks that were held in bond.

In 1866 the company moved the premises in Sackville street to numbers 46 & 47 which included vaults and a tasting room.

Gilbys incorporated their own bottle cases which they had patented as well as the new capsule caps instead of the wax seals that were more commonly used. Selling spirits and wines directly to the customers through the shop under their own labels was the way forward for the company.

It is estimated by 1874 Gilbys held somewhere around 300,000 gallons of Whiskey in stock, this was obtained from various distilleries located within Dublin. 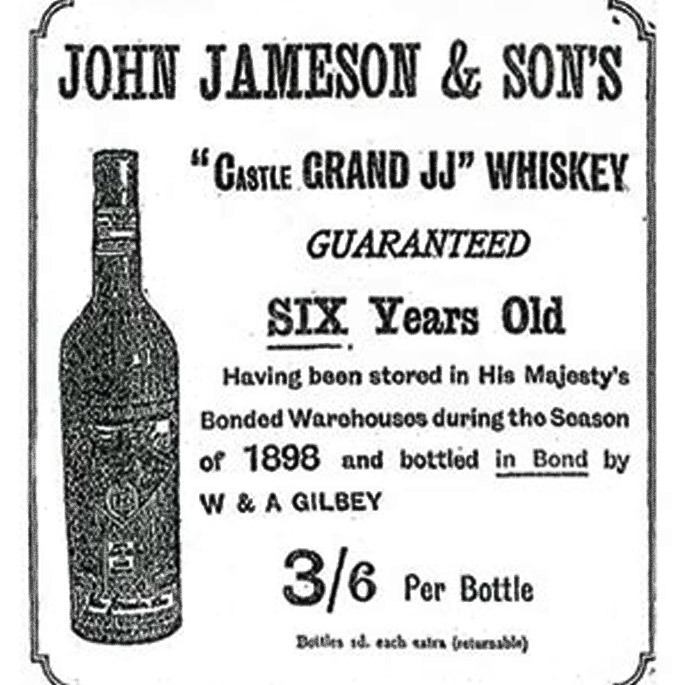 In 1887 W & A Gilby formed an alliance with Jameson and marketed all whisky sold under the Castle Grand Whiskey was obtained from Jameson and held an age statement of 6 years.

Inventory shows that at the turn of the century Gilbys were holding 700,00 gallons of whiskey obtained from John Jameson and Sons and filled directly into casks owned by Gilbys and stored in the Harcourt Street Bond.

The first official mention found for the naming of Redbreast came in 1912 when Gilbys were officially selling  “Redbreast “ J J liqueur 12 year old which at the time was described as one of their “ famous brands “ suggesting the “ Redbreast “ name was always associated with the 12 year old Liqueur!

The name Redbreast is believed to have come from the Chairman of Gilbys who was an avid bird watcher and that is the most probable reason the Robin and his Redbreast show so prominent on the label still..

The Redbreast name wasn’t the only name the liquid was known by though ! The liquid also had the nickname of the “Priests Bottle” in the mid 1920s, this was due to Ireland’s political turmoil and economic hardships. Money was tight and Luxury bottles of whiskey were not affordable to  most but due to the Clergy having a slightly better standard of life, status and more comfort they were still believed to enjoy the odd bottle or two of Redbreast..

Today the name of “ Redbreast “ is commonly known the world over and is much loved by those “ in the know “ ..  Produced at the Midleton distillery which is the home to Jameson, Redbreast is commonly know as the definitive Irish single pot whiskey.

If you want to understand the importance of single pot Irish Whiskey then look no further than Redbreast !

Nose.. Succulent dried fruits drift upwards and delight the senses while a soft note of chocolate starts to shine through with a toffee, liquorice and old leather aroma which all marry so well together.

Palate.. Again the dried fruits shine through along with some nice spiciness and sweet notes. Tobacco leaf, candied orange, chocolate and thick molasses offer plenty of depth and a lovely plum jam note just finishes this off in style.

Thoughts.. I’ve had the odd Redbreast before and I’ve always been more than impressed, this is no exception.. Irish whiskey is certainly trying its best to make a big splash within the whisky / Whiskey world and with people like Barry Chandler from the Stories and Sips blog and YouTube channel (   https://www.storiesandsips.com  check it out, it’s full of very interesting stories and facts about Irish Whiskey ) and Omar Fitzell from https://thatsdramgood.com probably the leading blogger about Irish Whiskey in general !!

Its with thanks to Omar that I’ve had the privilege to try this whiskey and it will be hard to rival it with a dram in exchange but I do have a little something in mind for him !!

Anyway back to the whiskey ( got to remember to put the ruddy E in there ) This is such a big presence in the mouth, the flavours explode and make all the senses dance and feel alive, Redbreast whiskey is as good as it gets, well balanced, complexity and it puts a smile on your face every time you go to sip it..

Thanks go out to Omar for this wonderful sample of Irish Single Pot Whiskey..