Having not reviewed much from Bunnahabhain I now find myself looking at a few expressions and wondering why ?

This is one of the Islay distilleries that offers unpeated whisky and although that is the last thing you expect when talking about Islay it’s certainly becoming more acceptable these days.

Located at the mouth of the Margadale spring on the shores of the sound of Islay the name Bunnahabhain comes from the Gaelic for ” Mouth of the river” .

Founded back in 1883 ( although the bottles show 1881 )the distillery can trace its origins back a few extra years when William Robertson and Baxter blending house joined forces with the Greenlees brothers and created the Islay Distilling Company.

The Distillery was built upon the reliance of the sea and those who risked their lives sailing her, this is where the logo of the helmsman comes from that Bunnahabhain proudly mounts on each bottle and representation of the distillery.

Having closed its doors in 1930 due to the economic climate after the Great War the distillery laid dormant for several years and runs until 1982 when again the doors close for a few years..

Now under the Distell umbrella the distillery has a capacity to produce around 2.7 million litres of alcohol per year which is split between peated and unpeated spirit.

This expression is a marriage of two cultures, the whisky making and essence of Islay with its rugged shoreline and temperamental weather marrying with the blue skies and sun beaten landscape of Scicily,

Initially laid down in 1988 into traditional oak casks before transferring into four Marsala hogsheads in 2016.. 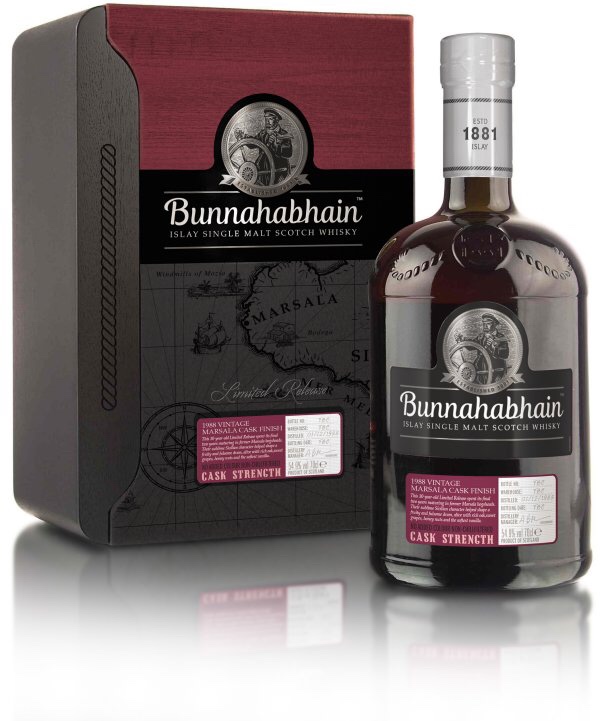 Nose.. Dried fruits and chocolate aromas rise nicely and entice you further in, summer berries, orange peel and fresh apples along with vanilla, toffee and some liquorice notes lurking in the background..

Finish.. Lingering oak with a twist of sweetness.

Thoughts..Yet another well balanced release from this Islay Distillery.

Although this expression boasts a fair age it still has that lively gel to it and the aromas and flavours just burst into life as soon as you approach the glass..