Then you talk to them about something else and you get “haven’t tried them because it’s too expensive or it’s above my budget” you can’t win..

Well in my opinion Glen Moray has always been one of those underrated distilleries that people just don’t seem to realise that they have been releasing some wonderful gems under what is now the “previous ” master Distillers watch..

Founded in 1897 the distillery proudly boasts only 5 previous master distillers with the 6th just being appointed! Dr Kirstie McCallum is the lady who has been given the keys to the warehouses and a brand new title of ” Head of Whisky Creation” so maybe Graham can boast he was the last Master Distiller..

The distillery has the capacity to produce 5.7 million litres of alcohol per year and with a proportion going into blends the remaining liquid has been laid to rest in a multitude of cask types including bourbon, wine, Sherry, cider and Rye in order to become the next single malt releases.

The distillery boasts a superb finishing programme where Graham used first fill bourbon casks to initially mature spirit then a selection of cask types to do well thought out finished expressions like this 21 year Portwood release, the future of the distillery looks rather rosey and only time will tell if Kirstie will continue the hard work or go down a different route..

As mentioned this new addition to the Glen Moray core range was initially matured in Bourbon casks before receiving a finishing period in Port pipes..

Nose.. An initial burst of summer fruits, vanilla and cherry notes greet you before a little chocolate, orange marmalade and digestive biscuits. Soft spices eventually turn up with a little cinnamon and fresh ginger. 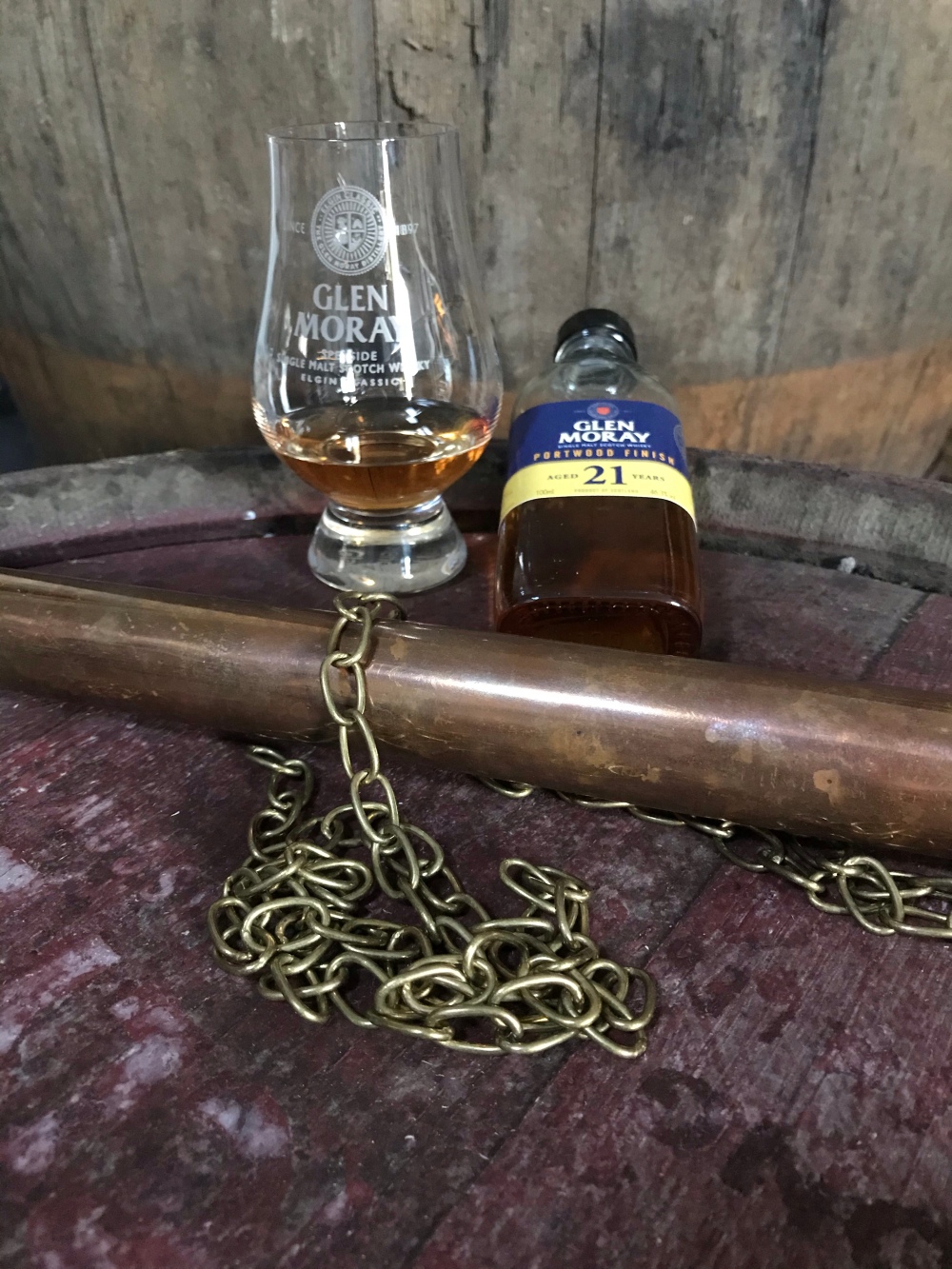 Palate.. Those spices dominate the initial burst of flavour with ginger bringing a little heat before a more fruity side begins to muscle its way in.. Dried fruits, red apples, berries and oranges are all evident along with chocolate digestives, aniseed twists and pear drop sweets..

Finish.. Drying with a touch of oak and lingering spices.

Thoughts.. Sometimes you build something up so much and anticipate a creation of such magnitude thats it’s impossible for it to live up to the hype you created and when I first noticed this release that anticipation started..

It has to be good after all the 25 year old version was superb, yes this is a few years younger but hey that’s not going to lesson the pleasure. Or is it ?

No is the simple answer.. This lived up to the hype thank god.. The flavours and aromas are there in abundance and although I did feel in places it felt a little thin ( mostly the finish ) this is still a superb and very welcome addition to the range..

As Graham leaves to continue his journey elsewhere his legacy will live on, whisky he and his colleagues have laid to rest under his tenure will continue to bring smiles to many for years to come and although the names will fade away or mean very little to most in the future it is with gratitude that those who know him will raise a glass to him and the team for a long long time to come..

With thanks to the team at Glen Moray and MPR for this official sample..,

To Graham and Fay ( if they read this) I hope the next part of your journey fulfils the ambitions you have and I look forward to seeing how you put your mark on the new venture..