The simple fact is that whisky has a deep origin and chequered history within Ireland and that alone makes Irish single malt whisky / Irish pot still whisky a very underrated product, or should I be saying whiskey ? well whichever spelling we go with it still boils down to the fact Ireland makes some stunning liquid that still seems to be very under rated..

History tells us that whiskey was around as far back as the 12th century and it was in fact the Monks themselves that introduced us to the water of life.. Born out of the traditions of producing perfumes in the Mediterranean regions. The first believed records of “distillation” goes way back to the 2nd millennium Bc where it is believed Perfumes and aromatics could have been made in a similar way to our distillation procedures.

Records also tell us that through the centuries distillation in some form or other was used to produce many different things and the processes used today has been developed since the first known use with alcohol somewhere in the 12th – 13th century to make wine..

The use of distilling was then used to produce medieval tonics for medicinal purposes before sometime in the 15th Century the distillation process as we know it was brought into the monastery’s of Ireland and Scotland and early forms of distilling for other purposes were recorded.

The monks are believed to have passed on the early knowledge of distilling and history again tells us that ” aqua vitae” was indeed enjoyed by many and even early royalty with James 1V of Scotland having a passion for ” Scotch Whisky” . It is then believed somewhere between 1536 and 1541 Henry V111 gave orders to dissolve the monasteries  forcing the monks and the art of distilling out into the public domain, distilling was now done in the homes and farms and by those who had the knowledge of distilling passed on by the monks.

The monks also had to find a way of surviving on their own, they made whisky although the spirit was not aged at this point and was drunk by most at an undiluted strength.
Moving on into the 1600’s the first licensed distillery was the old Bushmills distillery in Northern Ireland, the distillery was granted the first license on the 20th April, 1608 by King James the 1st, with many of the distilleries in Scotland becoming legit in the 1800’s. The production of whisky has taken many turns since 1608 and with taxes forced upon the industry in 1707 with the emergence of the ” Acts of Union” and later the ” English Malt Tax” in 1725 which forced so many of Scotland’s distillation process to either cease or go underground it’s a far cry to the massive market it is today..

In the early part of the 1800s, Ireland was in fact the largest spirit market in the United Kingdom, the demand for spirit was exceeding that of  England and indeed Scotland..  Dublin, then the largest market for spirits in Ireland emerged as Irelands major distilling centre and by 1823, Dublin was in fact the home to the five largest licensed distilleries in the country.

By 1878, the reputation of Dublin whiskey was such that Distillers Company Ltd, ( a Scottish distilling firm)  built a distillery themselves within Dublin and claimed that Dublin whiskey could sell for a 25% premium over other Irish whiskeys !!  During this period, the four largest Dublin distilling firms, of John Jameson, William Jameson, John Powers and George Roe (all family-run, and collectively known as the “Big Four”) came to dominate the Irish distilling.

The produce of these distilleries became known as single or “pure pot still” whiskey and was made from a mix of malted and unmalted barley, and solely distilled in pot stills. The style initially had emerged as a way to avoid the 1785 tax on malt.

By the latter end of the 1880s, only two of Ireland’s existing 28 distilleries were actually producing Irish single malt whiskey, the rest were still determined to produce what was becoming the traditional – pure pot still.

Irish whiskey which was once considered the world’s most popular whiskey would now enter a century of decline, the once famous distilling area of  Dublin and its famous big 5 would all no end up closing the doors and ceasing production.

The fact that the coffey still was actually an idea born within the borders of Ireland but ridiculed within the industry actually almost brought the industry to its knees and was a major factor in Scotland’s industry taking off.. The only saving grace within the irish industry is within the last decade or so more and more distilleries are starting to pop up and with the Teeling distillery opening its doors once again in the Dublin area the future can once again look rosey for the industry.. 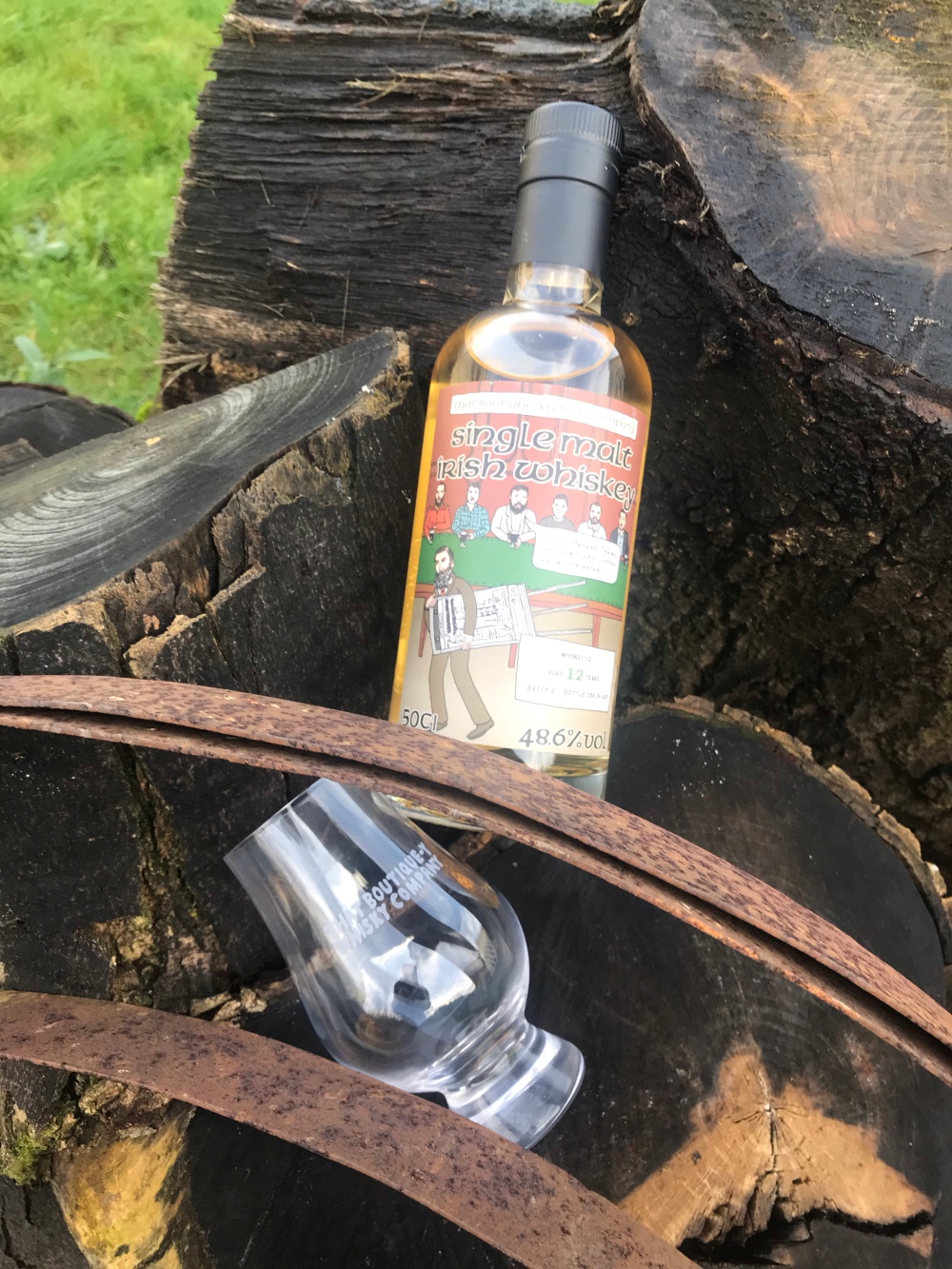 As an independent bottler TBWC do seem to get hold of a few little gems and the slow trickle of Irish single malts certainly falls within the “little gem ” category.

This can only be good for the Irish industry as the amount of irish whiskey out there that is getting recognition is not enough !! We need to be shouting from the roof tops at just how good the liquid is that is coming out of the Emerald Island..

Embrace the quality and begin to understand the differences between Pot still and traditional single malt whiskey / whisky and you then begin to appreciate the Irish whiskey scene itself..

The fact this award winning Indie bottler keeps releasing bottles of Irish whiskey tells us that there is quality and value within those shores and the emergence of independent bottlers within the irish scene also gives us the hope that this style of whiskey is here to stay..

Nose.. Beautifully floral and full of fresh fruits. This reminds me of walking through an apple orchard on an early morning, the dew still sitting on the grass beneath your feet, the droplets of water hanging onto the apples and the fresh scents on undisturbed flowers and the damp air that surrounds you as you quietly take another step, all the time day dreaming as the warm rays from the slowly rising sun touches the damp, cold skin on your face..

Palate.. Fresh peeled apples, poached pear and a spoonful of honey, add a little lemon rind, digestive biscuits and a soft ginger note that just brings enough heat to remind you this isn’t to be rushed..

Finish.. Warming and enough to make you smile..

Thoughts.. This is my kind of whiskey / whisky and whoever said whisky is complicated needs to try this !! this is simplicity at its best..

The soft nature of Irish single malt or Pot still whiskey is the driving force behind what is after all a bottle full of flavours and happiness, there is no need to over evaluate liquid like this, just sit back, open the bottle and bloody well enjoy it.. I am !!