Founded in 1878 the Glenrothes distillery sits hidden away in the town of Rothes, tucked behind very typically stone built houses, trees and split by the meandering burn of Rothes.. The distillery is one of the few distilleries today that is basically closed to the general public although a little unknown fact is that there is a public right of way through the grounds which lets you still get up close and personal with the buildings and immerse yourself in the atmosphere and day to day workings of this beautiful distillery..

The distillery itself has a capacity to produce 5.6million litres of alcohol per year from the 5 pairs of stills and even boasts its own small cooperage where they re-furbish the casks and although I understand they no longer actually build casks here they once did..

Owned by the Edrington group the Glenrothes does seem to be the forgotten whisky producer within the group and although that is a sad factor it is also a benefit as this means we still get a relatively untouched and un spoiled liquid from this sleeping giant..

When you look at the liquid coming from the distillery it is not hard to see why the whisky community has a lot of time for them, generally full of big fruity flavours and pleasing aromas the whole  package does feel like something you want to happily hand over some money for..

That said the range has recently been given an update and has decided to go down the age statement route rather than the vintage line.. I am not sure which side of the fence you all sit on when it comes to age statements, vintages or NAS but i for one am happy with any version as long as the price tag still represents value and is representable towards the liquid within the bottle..

If you have visited the blog before then you might realise i am a fan of Glenrothes and especially the sherried side of production and Given this is 100% sherry matured then what’s not to like ? well there is one thing.. but it is not a dig at Glenrothes as such but more a sad fact of life in that the sherry butts are not old, well used butts from some old / ancient bodega but “seasoned”..  What the hell does seasoned really mean though ? Well its held some sort of sherry ( usually Oloroso but maybe not the best quality) for a short period of time which is generally between 6 months and 24 months but typically 12 to 24 months, the Sherry may also be used to season more than one cask, maybe even 3-4 before dumping or becoming a sherry vinegar.. These casks are more traditionally casks that many of the whisky companies have sourced as new and sent to the sherry producers to be seasoned, generally made from European Oak. 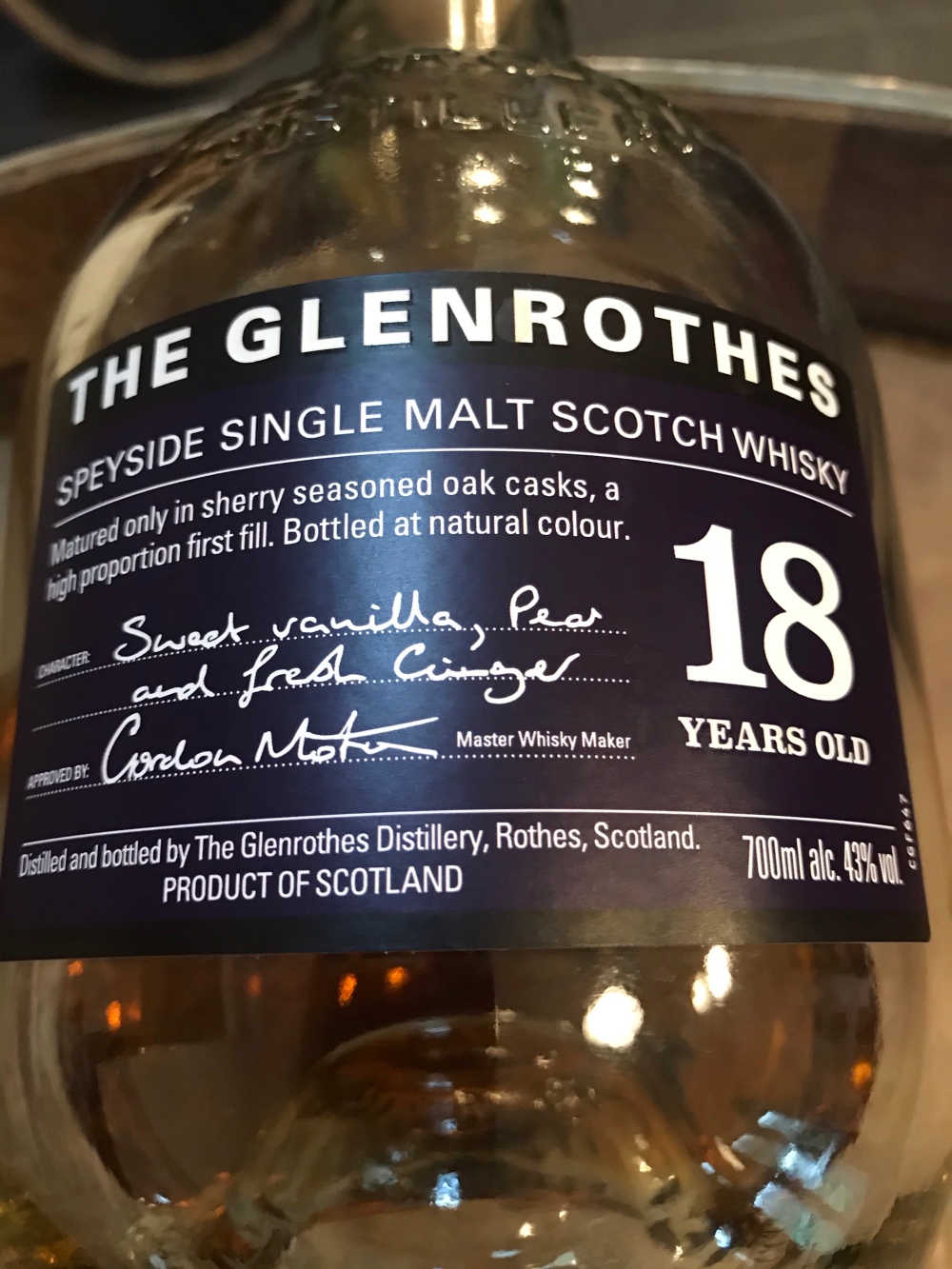 The sherry has now managed to impart its flavour after the seasoning and will have breached the first part of wood from what is essentially a brand new cask unlike the bodega sherry casks of old that were probably 30-40 or even 50 years old before they were even introduced to the whisky industry, and unlike the transport casks or more modern seasoned casks these were made from American Oak not European oak.. Saying that though many of the casks “traditionally” used in the whisky industry up until the 1970s would still have been transport casks, these were the casks used to ship the sherry from the bodegas to the bottling destinations or shops where the sherry would be sold, with that in mind though you have to consider there was still a difference between the transport casks and the seasoned casks of today..

That fact the transport casks of old contained sherry that was already mature and ready for sale and not a unseasoned sherry like some of the seasoned casks will be receiving today, that would have given those transport casks a far better and more intense flavour  profile,  the transporting of sherry and the sales of those casks was all stopped around the mid 80s when the bottling by law started to be done in the Jerez sherry region itself..  I am sure i watched a video recently where Balvenie were talking about the sherry butt being 70 years old before they got hold of it and then using it more than once to mature whisky..

This is not exactly the fault of the whisky industry though as the sales of sherry has dropped like a bomb over the years and although there does seem to be a small upturn it is still a shadow of days gone past, no sales equates to no spare casks which in turn means a new approach and this is where the whisky industry can take responsibility, season the casks longer, allow the sherry to really get into the wood, after all if we think of bourbon as a seasoning then that remains in cask for a typical period of 3 years or more, do it and the long term quality will be sustained and even intensified. There is a real difference in the quality of product when the seasoned cask is rushed or poorer quality sherry is used in the seasoning, the first fill or finishing period of the whisky might be good on the first occasion but there after a less dominant flavour will be achieved..

The cost of these casks is no small matter though, with a sherry butt costing anywhere up to a £1000 each or even higher in some cases, add to this the time to make and season the casks and you have a considerable cost, although i am sure the big companies will be getting them at a lower cost it is still a major factor.. Groups like Edrington have now taken the steps to have the butts made themselves, filled with sherry / loaned to the Bodega and recalled in order to use.. This is to ensure quality and a constant source, Cost is a major factor and when it comes to producing a high quality product then cutting corners does eventually show up..

Nose.. Dried fruits mingle with dark chocolate infused with orange and a little ginger, toffee and burnt caramel are evident along with leather, aniseed and soft pineapple notes.

Palate.. This goes straight into oak and spice with far too much emphasis on the oak.. Dried fruit notes slowly make their way through the oak and with them comes a chocolate digestive note, plum sauce and some cherries to plonk on top..

Finish.. The oak returns for a lingering oak dominated finish..

Thoughts.. It might sound from the notes this is too oaky but that’s not the case for me! I am happy for the oak to dominate but what it does show to me is that the “seasoned oak” just is not giving that punch and especially after 18 years..

What we have to get used to is the big sherry bombs we remember might just be a fading memory and the way forward is going to be these sherry style whiskies that actually emphasise the initial spirit and not the previous contents !!

I have often spoke to other whisky Geeks / fanatics and industry people about the use of casks that are filled “wet” and by wet i mean still containing some liquid from the previous fill be it sherry, wine or bourbon and although this might only be 1 – 2 litres, add this to what might be held within the wood and you could be looking at 10 – 15 litres of liquid, add this to the new make and you have a very good start to the maturation process..

Is it cheating ? of course it is but it happens, get over it.. This then brings in the old teaspoon theory and does it really mean its not a single malt if someone deliberately adds a small amount from a sister distillery whisky.. Its no different in my opinion its just a loop hole within the law that is taken advantage off..

Any way i digress, back to the topic at hand.. The Glenrothes 18.. the liquid is good, it will not blow your mind but it will bring a smile, its not perfect but it is probably the best value in the aged range, although i would possibly head more towards the Whisky makers cut with its punchy more typical sherry bomb style..

Will i buy another bottle ? possibly..