Founded inn 1843 by William Matheson the Glenmorangie Distillery is located within  the Scottish Highlands and is one of the whiskies people of a certain age might very well have started their whisky journey on.

Production started in November of 1849 after a lengthy re build and runs until 1887 when the distillery once again goes through a re – build, this is when the Glenmorangie Distillery Company Ltd is formed.

In 1931 the distillery closes its doors and production ceases for 5 years, November 1936 sees the spirit starting to flow once again.

In 1980 the floor maltings stop being used and the number of stills doubles, and 10 years later in 1990 the number of stills doubles once again to 8. Today there are 12 stills In operation, 6 x wash stills with a capacity to hold 12,500 litres and 6 x spirit stills with a capacity of 8, 000 litres ( these stills are still considered as the tallest in the industry ) and with a 10 ton full Lauter mash tun, 12 stainless steel washbacks.

All this equates to a capacity to produce 6 million litres of alcohol per year although with current expansion plans this figure will of course increase.. 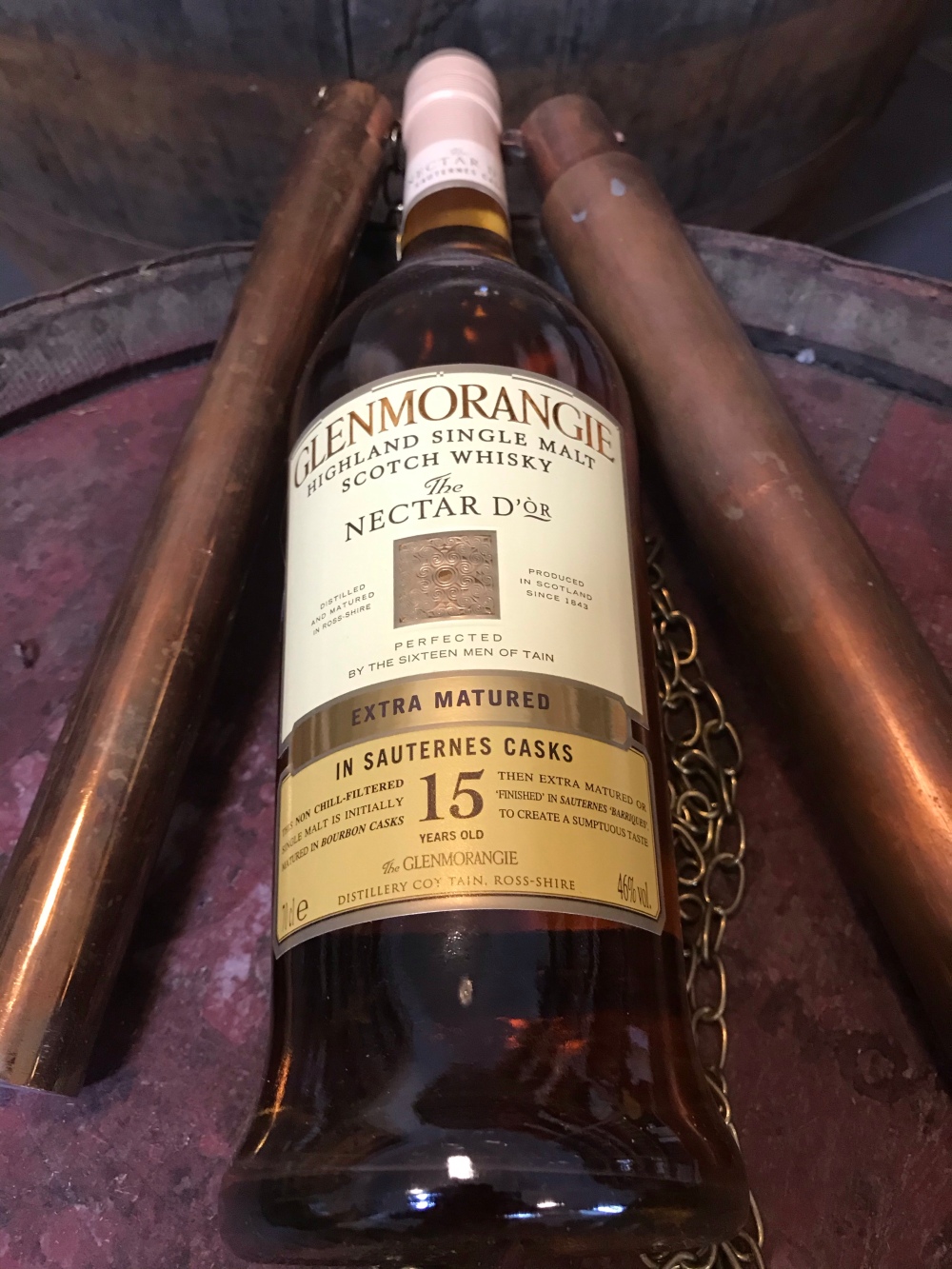 Initially matured in Bourbon casks before being finished in hand-selected wine casks from Sauternes, which is said to be the most famous and ancient sweet wine-growing region of France.

Over the years since the launch this expression has gone from being a NAS to a 12 year old before receiving an extra maturation period where it went to being a 15 year old to once again reverting back to a NAS.. todays review however is for the 15 year old..

Nose.. Vanilla cheesecake with freshly grated lemon zest is the first thing that comes to mind, floral with a sweet edge from iced doughnuts, custard cream biscuits and a touch of fresh ginger..

Palate.. A rich sweetness is soon followed by a slight lemon zest bitterness but in a very pleasant way ! Ginger biscuits and cinnamon buns interact with cinder toffee, winter berries and a hint of honey..

Thoughts.. This is certainly a sweet whisky with lots of fresh fruits and a lovely citrus effect that balances out that sweetness perfectly. Having had the original Nas and comparing it to this one, the sweetness has a definite edge to it and shows off the extra maturation perfectly.

I always remember having a few discussions about the merits of Glenmorangie over its rival Glenfiddich, old friends from the early day’s of my whisky journey always preferred the ” smoother ” taste of the Glenmorangie while I preferred the ruggedness of the Fiddich, what I do know is, we would all agree its great to re visit old friends as Glenmorangie is..

Drinking this Nectar d’Or certainly brings back memories from my beginnings, I don’t want to say its simpleness is what makes it a success because that sounds rude but there is something that is just so familiar about the liquid, it does have a simple DNA but that is what makes this so easy to drink, it has a structure that just compliments itself and that is and always has been what has drawn me back time and time again to Glenmorangie..

A very easy, versatile whisky from Glenmorangie ( Ps, I am told this makes a wicked cocktail !! )