Founded in 1935 and originally known as the “Old Heavenhill Springs” distillery, it was 5 brothers from the Shapiro family and a group of investors that were behind the founding of this new distillery, founded shortly after Prohibition ended in Bardstown, Kentucky and in a time of depression and great hardship in the country it was seen by many as a bold move..

Barrel number 1 was filled December 13th, 1935 and production continued until 1942 when due to the war the Government shut down the distillery in order to produce alcohol for the war effort.

Today Heaven Hill is now the biggest Independently, family owned and operated distilled spirits supplier in the country and is the 6th largest producer within the USA.

The company also boasts to be the second largest holder of maturing bourbon stocks in the world with a reported 1.5 million barrels held within its warehouses.

Today names such as Elijah Craig, Evan Williams and Rittenhouse all come under the Heaven Hill umbrella.

The idea behind the brand is to bottle some of the finest single casks available as well as run a host of independent whisky bars, on top of this they also offer the chance of buying a cask of matured / maturing whisky or freshly filled casks of new make spirit.. 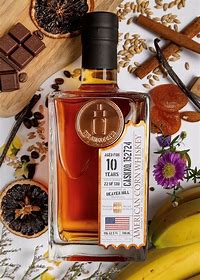 Palate.. Those spices give a nice kick before the dried fruits and vanilla sweetness balance it out, candied orange and plum jam delight the senses before a little coffee bitterness re awakens the senses..

Thoughts.. Bourbon and American whiskey was always something i shied away from due to the sweetness but as my palate develops and my  needs change i have found myself becoming more and more intrigued and fascinated by the liquid produced across the pond..

Those sweet notes that once put me off now pull me in and the aromas just make me salivate and yearn to dive in, and just the same as single casks of whisky these single casks of American whiskey / Bourbons really do offer some very interesting releases and insights into the American liquid..

If you want to learn more about The Single Cask then look HERE..