Times were hard for the Captain of the Galileo. His face was becoming tired and his body was broken from many voyages. The endless cold, dark nights where his only friend was found within the bottle of whisky that adorned his table, his hands always shaking as he reached for his next glass.
What isn’t visible in his face are the terrible memories from previous experiences, the constant nightmares when the whisky hasn’t done its job or the feeling of fear that always filled his body and mind with an endless emptiness.

Why did this fear rule his body? Let me set the scene….

The year was 1815 and many years earlier when the Captain was still a young boy going by the name of Jack, his thoughts were always on the voyage ahead.  The BOUNTY was to be his first ship. The excitement that filled his words and actions were so obvious, a young man at the prime of his life ready to set sail for his first big voyage.

His job was to oversee the supplies of SPICES and FRESH FRUITS that were to be loaded on board safely, even the ones for the captain’s table. This of course meant the captain’s box. The box that held the maps, the secret destinations and the very reason this ship would soon be setting sail on this fateful journey, from which so many would not return.  It held of course, the whisky. The bottles of whisky that seem to be the captain’s favourite; the one that held his courage, his passion and his reason to keep going. These things were all hidden within the dark green bottle that held so many mysteries.

“Ahoy there young Jack”. The voice that sent shivers down the young lads spine echoed through his head as he turned to see the Captain boarding. His large frame walking up the planks of blaaack OAK saturated with thick TAR, weathered from the many years of SEA SPRAY, the haggard cap that covered the GOLDEN hair that bore some DIRTY strands and the fading scar obtained from a stray fish hook.

As the vessel left the docks young Jack sunk his teeth into one of the APPLES that had been held in the CHARED BARRELS. The SWEET spray bursting out and giving a FRESHNESS to the moment that would sit on his memory for many a year. As the days passed and the air turned more SALTY, the need for more sustenance brought the yearning for cooked MEATS. The burnt bits were always the tasty part. The SMOKY taste somehow filling the senses with a homely feel that he longed for so much. The memory of his mother cooking STEW over the SMOKY EMBERS, the big old COFFEE pot bubbling over the COALS and ASH that was surrounding the fireplace These were the days he wanted back so much.

The days turned so quickly into years. 5 to be precise before the day came that the young lad would never forget. The morning broke in the same way that every other day began. The stench of old SOCKS and shirts that badly needed some fresh air filled his nostrils, instead of smell of the OILS and SMOKE that normally filled the lower decks.

As he began to climb the steps to the upper deck he had the luxury of eating some of the DATES that had been left from the excursion ashore a few days earlier, along with some NUTS that had been ROASTED and the rarity of a fresh ORANGE stolen from another shipmate.

His first duty of the day was to climb to the crow’s nest. A job he hated but knew he had to do. The days went so slowly up there with nothing to do but think and remember his childhood. But today he would be thankful for this. Little did he know it might just save his life.

The sun was beginning to show itself from the eastern horizon. Slowly rising above the water line that reached as far as the eye could see. It was eerily calm and with only a slight mist, the air was particularly thick with SALT which was eating away at his weathered LEATHER overcoat which hid the TOBACCO from the indecisive weather.

The sun began to warm the morning DEW from his face and as it did his gaze was caught by something to his side. His head swiftly turning, his eyes squinted to catch sight of what was moving in the distance. Was this just his imagination or did he really see something? His mind was now racing with thoughts; thoughts of old tales told by sailors after a few swigs of WINE, SHERRY and COFFEE that was far stronger than it needed to be! Thoughts of monsters that lived in the deep oceans. A world so different from his own, but surely these tales of beasts, mermaids and Kelpie were only the mumblings of sailors too old and drunk to carry on.

Hours passed from the moment his imagination had convinced him there was something out there and as he heard the voice shouting him to come down, he turned and that’s when it happened. The ship rocked with a severeness that had the young lad fall to his knees. His hands reaching round to hold tight his crumbling body. His eyes firmly closed and the smell of fear surrounded him. As the sound of crashing filled his ears, his mind quickly passing to his mother’s kitchen once again, the familiar smell of SUGAR BURNING on the stove, the STEWING APPLES bubbling in the pot awaiting the PASTRY case. Were these things he would never again come across?

Moments passed but they felt like an eternity to the young lad as he still clung to the TAR soaked pole, not daring to open his eyes for fear of seeing what he knew was now just inches away from his face. The smell of BURNING and an EARTHINESS that sent shivers through him was overwhelming. SMOKE billowing upwards filled his lungs as his eyes began to open. His whole world was now just a shadow in his memory. Trembling he looked THE WEE BEASTIE in the eye and muttered “Today is not my day to die. I will drink to this memory, but you shall not take me today Beastie.”

It was not ARD to BEG for his life, but it was hard for him to understand why he was chosen to walk away. To once again return to his home on ISLAY where his family await him, while so many others didn’t. They would never understand what it was like to know the power of this BEASTIE.

47 1/2 years have passed from this day and his thoughts still send him back to the day he first met THE WEE BEASTIE.  I say first as he was to meet the beastie many more times over the years and though the memory was always RAW the Beastie remained in his thoughts. When the memory became too much for him he always return to the dram that some TWENTY SOMETHING years earlier had made him fall in love with this liquid. 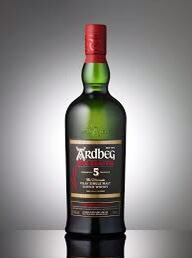